In Sickness and in Health

IN SICKNESS AND IN HEALTH

I was just thinking of the year 1932. I was thirteen and didn't have too many problems with my parents. Winnifred Jenner had died in January of a ruptured appendix. She, too, was thirteen. Then, in July, Alice Nelson died of the same thing. She was eleven, and both lived alongside Frog Creek. A couple of weeks later, in August, I became dreadÂ­fully ill. That evening Agnes, Carl Hilquist (the hired man), and I had played like kids do - tag, ball, etc., but that night there was no way I could sleep. I was so sick to the stoÂ­mach. One thing I do remember. The northern lights were dancing across the sky, and that was the first and last time I heard them rustle. In fact, I had been told they didn't make a sound, but I swear they did that night.

Next day, about two or three in the afternoon, Dad took me in the old Ford to see Dr. Miller. While on the way I had time to think. I thought of the two girls who were gone, and now it seemed to be my turn. As I began to feel sorry for myself I could feel the tears coming, and I tried to stop them so Dad wouldn't see me crying. Fortunately I had reached the hospital in time, but getting over the operaÂ­tion was terrible. We had to stay in bed for days â or was it weeks? Nothing to eat for several days but buttermilk, and even then gas would build up. Things sure have changed.

That same year Ole Johanson (our Swedish bachelor neighbor), Agnes and I went out picking raspberries on the west quarter. We were picking along the fence, when Agnes slipped and cut her arm on the barbed wire. Ole took out a handkerchief that hadn't been washed for some time and wrapped up the wound. This didn't go over too well with Mother, so right away she re-dressed the arm. Agnes didn't get infection, at that. I don't remember how the picking was that day.

George had a bout with what seemed like fluoride poiÂ­soning. Six or seven years ago we had sold our cows, so we started using powdered milk with well water. That water, used for all the cooking, had 2.6 parts per million of fluorideâ a lot more than the permissible amount of one part per million!

Gradually rheumatism set in, and George was steadily getting worse. There was inflammation in his shoulder joints, his legs were going out from under him, and he was getting to be an old man fast. It also affected his stomach. There would be such a great build-up of gas that he didn't dare eat anything after 4:00 p.m., or he wouldn't be able to sleep. The doctor had him try three different kinds of rheumatism pills, but they wouldn't even touch it. At the rate he was going George expected he would be in a wheelÂ­chair in no time.

A C.B.C. program, Air of Death, told about cattle and people getting sick and crippled from the fluoride in the air from some factory or gas plant in a town in Ontario. After the program, a doctor gave the symptoms of flouride poisoning in humans, and he described George's disease to a "T". Three weeks after we changed water he could feel a great difference, and he has never had anything like that since. Thank you, C.B.C. 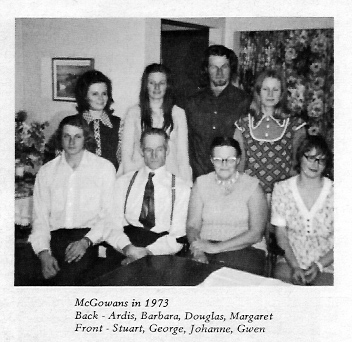