We came to the Frog Lake district from Youngstown, Ohio in 1935, when I was 3 1/2 years old. The district was not all that new to my parents as my mother's father, Ludwig Graw, homesteaded by Whitney Lake. That's where my dad met my mom, Anna Grau. 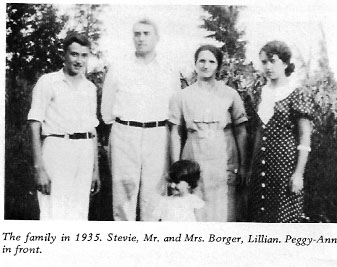 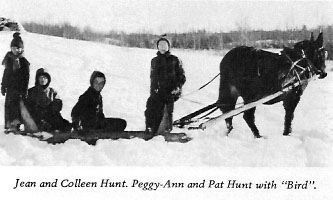 When we came up from Youngstown, Ohio there were Mom and Dad, my sister Lillian, my brother Stevie and me. But our stay in Frog Lake was a sad time for our family because on June 5, 1938, my brother Stevie was killed in an accident with a horse. Then, just five years to the day, on June 5, 1943, my mother passed away after three years of illness.

My sister, Lillian, had married Wm. 0. Litchfield and they had moved back to Wilmington, Delaware, U.S.A. Dad and I were left alone and we tried to keep the farm going, but it was too much for us. So we sold out in 1944. During all that time we lived in Frog Lake, and with all our trouble, we so much appreciated all the wonderful neighbors we had. They were always willing to help, and it was a wonderful feeling to know they were there.

One event is humorous to me now, but at the time it was not. I rode an old brown mule called "Bird". She was the laziest mule ever, I'm sure. Anyway I was late for school almost every day because she would stop at every gate on the way and she would go around in circles because she wanted to stop and visit. Well, one day she stopped at Fred Bowtell's gate. When Mr. Bowtell saw me he stood and laughed. Then he said, "Can you hang on, Peggy-Ann?" I said I could. So he went to the barn and got a big whip. Then he let Bird have one, and she trotted all the way to school that day. She never stopped at Bowtell's gate again.

After we sold the farm I lived with my sister Lillian in the States for six months. Then I came back to Canada and rejoined my dad in Edmonton, where I met my husband, Norman MacDonald. We were married in 1950 and have four children. Dad passed away September 14, 1966. I will never forget those wonderful, good times in Frog Lake.