Walter, born in December 1930, was educated at Heins- burg, Ashmont and C.L.C. Camrose. He obtained his Bachelor of Science degree in 1953 and Doctor of Dental Surgery in 1955. He has been on the United Church Board of Stewards, a teen and boys' leader, and executive officer with the Boys Sea Cadet Corps. Other positions held include president of Chamber of Commerce, Curling Club and Golf Club; director of Recreation Board, and Zone 13 of the Alberta Curling Association; and member of the Royal Canadian Legion. He also has many other professional and business interests. His wife is the former Laura-Marie Simpson, R.N. of Tilley, Alberta. They have two boys and two girls, the oldest of whom is now aged 16 years. (1976). Their home is in Fort Saskatchewan. 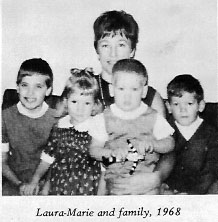