Gustav Kjenner was born in Lier, Norway, February 3rd, 1865. He married Tora Mathilde Hansen May 8th, 1891. She was born in Asker, Norway, April 10th, 1869. They had a family of eight children: August, Anna, Karsten, Gudrun, Frithjof, Trygve, Helga and Ruth.

In 1910 Dad migrated to Canada to the Asker district, east of Ponoka, Alberta. In 1911, August, the oldest son, also came to Canada and in 1913 Mother and the rest of the family, with the exception of Anna, left Norway to join them in Canada. Mother, with the six children, had some exciting experiences on the trip. On the boat from Norway to England all the money she had was stolen. When they got to England the boat they were supposed to come on to Canada was already overloaded, so they travelled by train from Hull, England to Glasgow Scotland, to catch a boat there for Canada. On arrival in Glasgow some of the fare was refunded to Mother, as the fare on that boat was cheaper. So this was all the money they had for the rest of the way. The trip all together took seventeen days, arriving in Ponoka at 5 o'clock in the morning of May 17th.

There was no one to meet us and no one could speak the language. One man on the station platform realized our predicament and he motioned for us to follow him. He took us to a small restaurant that his wife was operating and she was Danish. We had breakfast there and they found out where we were going. They managed to phone to where Dad was and he arranged for this man to bring us, as he was the local livery barn operator. We were all piled into a democrat and started off. The roads were very muddy and lots of water some places. In one place the water came up to the floorboards of the democrat and something broke. The driver unhooked the horses, climbed on a horse and away he went leaving us all in the democrat. After about two hours he came back with a fellow and a team of horses and a wagon. The wagon was brought up alongside of the democrat and we transferred to the wagon for the rest of the journey. The man with the wagon was our cousin, but we didn't know it at that time. 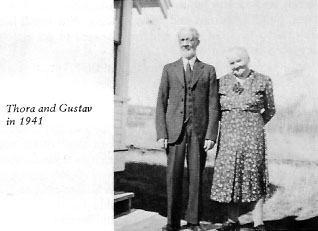 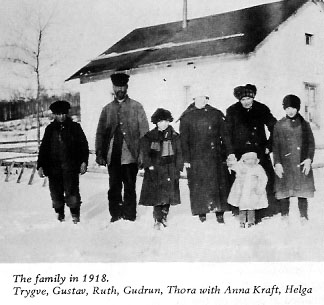 Shortly after, a cousin, George Kraft, also came and filed on a homestead. He was born in North Dakota, February 16, 1895. He married sister Gudrun; they were married in the German Lutheran Church just north of Heins- burg. They had one daughter, Anna, born June 17, 1916. George and August bought a well boring machine and were boring wells for the settlers, mostly south of the Saskatchewan River. While at this work George caught pneumonia and after a short illness died. He was buried in the German Lutheran Cemetery north of Heinsburg in the fall of 1917.

Trygve, Helga and I were of school age and had to attend the Frog Lake School, having to walk about four miles each morning and night to do so. Dad's homestead was outside the Frog Lake school district so we had to pay a tuition fee also, in order to attend. Dad applied to have his homestead included in the district and this was eventually granted. The first summer's work on the homestead consisted mainly of clearing land for hay ground, building of a barn and chicken house, building corrals and some fencing. Not much land was broken the first year, but we managed to get enough for garden and potatoes.

Wild game and fish were plentiful at that time, also wild fruit, especially blueberries and raspberries. We brought with us a couple of cows and managed to get a few chickens, so living was quite cheap. Dad, each winter, did trapping locally for coyotes, muskrats and weasels, and the income from this enabled him to spend most of his time at home doing the things required. He also repaired shoes and harness which brought in a little extra cash.

A year or two after moving on the homestead the Provincial government made loans available for the purchase of milk cows. Dad obtained a loan and bought about ten head of cows. We then milked ten to fifteen cows each summer and sold cream. A cream testing station had been set up at the Frog Lake store. We took our cream there each week in a wagon; after being tested it was hauled by truck to the creamery in Kitscoty, Jack Litchfield operated the store and testing station, and hauled the cream to Kitscoty at that time. In the summer we quite often picked blueberries also, which were taken to the store and sold or traded for groceries required.

August's and Karsten's homesteads had been heavily bushed but were fire killed leaving almost a solid mass of stumps. The first few acres broken on August's homestead was done with Fred Peterson's team of horses, using an old wooden beam breaking plow after the stumps had all been grubbed out by hand. However, the stumps gradually rotted and a few more acres were cultivated as the years went by. No large cultivated acreage was ever obtained on the homesteads as most of the land was too hilly and rough. 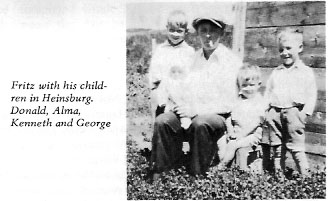 Karsten joined the army during the first World War. When he returned from overseas, he did not come back to the homestead to live. He married and farmed in the Asker district east of Ponoka until his retirement. August remained at home on the homesteads doing the jobs necessary, until his sudden passing April 8th, 1940.

In pioneer days, before too many doctors were available, Mother was called upon to assist at the birth of close to one hundred babies in the Frog Lake and surrounding areas. She was always ready and willing to help a friend or neighbor in time of need. The Kjenner home was always a place for the young people to gather at all times of the year. With August's gramophone, singing, playing cards or games there was always a lot of fun and young folks came from miles around.

In 1940 Dad and Mother moved to Bawlf where Helga lived. They celebrated their Golden Wedding May 8th, 1941. Dad passed away April 25, 1942. Mother lived to be 92 years of age; she passed away December 21st, 1961 in Camrose. They both have their resting place in the Frog Lake Cemetery.