THE HISTORY OF JOHN AND KATHLEEN SHAREK AND FAMILY

John and Kathleen Sharek came to Canada from the Ukraine on the 12th of June, 1913 with a nine-month old son Marshal. They lived with John's brother Paul Sharek almost two years, in the Primula District. They moved to a homestead just one mile south from Mooswa Ferry. They raised a family of four: one son Marshal of St. Andrew, daughters Olga (Glowitski), of Vermilion; Zelma (Nettleton) of Vermilion; and Jennie (Penerowsky) of McLennan. They lost one little girl, Pauline, at the age of two years. After thirty-five years on the farm they moved to Lindbergh and lived there for fifteen years. The last seven years they spent in Vermilion. John passed away in 1968, Kathleen in 1973. They had 12 grandchildren and 22 great grandchildren. 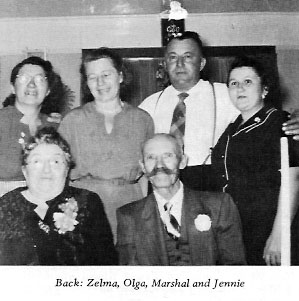