In 1910 a yoke of oxen pulling a heavily laden wagon stopped at the Makohin home located on the N.E. 1/4 section - 36, 55-5-W of 4th Meridian. The wagon belonged to Yasko Sawak. One of the newcomers with Sawak was Paul Sharek.

After a couple of months Paul applied for and obtained his "homestead", which consisted of a quarter section of land directly south of the Makohin homestead. There he built a log house of about 20' x 24' , and covered it with freshly plowed prairie sods. Six or seven years later the sods were replaced by a rye straw thatch. The interior of the house consisted of two rooms. One was a kitchen-dining area and the other was a sleeping-living area. All the furniture, including beds, was homemade of native wood - either poplar or spruce. Initially a mud floor was the best that could be provided. During the 20's, though, a wooden floor was laid. This added a lot to the appearance and reduced the amount of work required to maintain it.

In 1912 Paul married Maria Kowal and they moved into their newly constructed house. There was no shortage of work. Rooting trees, brushing willows, plowing the virgin soil, planting grain and garden, and then harvesting were the chief occupations. The first year saw Paul working with railway construction. With the money earned he bought a yoke of oxen and broke four acres of land. By 1920 he had 60 acres broken and had managed to buy a team of horses. 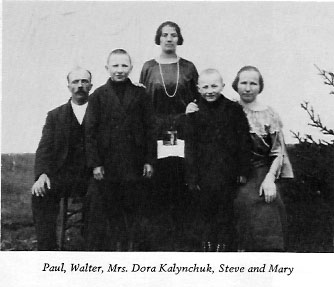 The community in general was made up of young people who, for the major part, came from the Ternopol area in the Western Ukraine. With them they brought the desire for education, and cultural activities. For their long winter evenings they created their own entertainment by staging plays, concerts, talent shows and dances in the community hall (Chitalnia), which was constructed in 1923/24.

Primula school was built in 1913, and had a constant enrolment of from 20 to 35 until its closure after World War II. It offered a Grade one to Grade eight education, but numerous students from this small school continued with high school and university education to become agronomists, teachers, medical doctors, dentists, M.L.A's, engineers, accountants, nurses, and citizens in other walks of life.

Paul and Mary Sharek had two children. I am at present principal of Queen Elizabeth Composite High School in Edmonton, and Stephen, who assumed the responsibilities of maintaining the old homestead and the acquired land around it, eventually moved into Heinsburg to become a grain buyer.

Like most other rural communities on the prairies, the Primula community shrank in population as the city lights lured the young away from the farm. With the advent of technology more and more land is farmed by fewer and fewer people. The original buildings on homesteads are in a state of disrepair and are quickly disappearing, and so are the original settlers - the pioneers.

Editor's Note: Walter Sharek retired at the end of the 1974-75 term. He once taught at Heinsburg school, when it stood on the site of the present community hall. In 1976 Steve was transferred to the Alberta Wheat Pool elevator in Elk Point.