Ernest Vasey and his brother Linus came to Consort from Midland, Ontario to homestead. Linus later returned to Ontario, and in 1910 Ernest brought his bride, Mabel Beatty, from Midland to join him in Consort. At that time Ernie had a livery stable. While there, on March 26, 1919, Cecil was born.

Later that year they moved to the Frog Lake district and spent the winter of 1919-20 with Maggie and Billy Jamison. Mr. Vasey looked after a herd of cattle for a rancher from the Consort area. There was no feed to be bought and many of the cattle died of starvation. In the spring of 1920 the Vaseys moved into a house next to the Frog Lake Store. Mrs. Vasey had an overnight stopping place while Ernest worked for Harry Bowtell who lived near by. 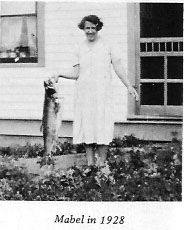 On September 21, 1924, a daughter Alma was born. In 1926 the Vasey family moved to Marwayne, Alberta, where Ernest had a delivery service. Then in 1935 the family moved to Edmonton where Ernest went into the cattle business. First he operated his own feed lot for a number of years. Following that he managed a buying station for Burns Foods Ltd. Sometime later he took on the managership of a large feed lot for Lee Williams of Weiller and Williams Ltd. He built a large house on adjoining property at 50th Street and 131st Avenue in Edmonton where they spent several happy years. Mr. Vasey's last employment was with J.B. MacDonald Ltd., a demolition company, where he passed away of a heart attack in February of 1962, while sitting at his desk.

Mrs. Vasey's life was centred around her family. She was very clever with her hands and spent much of her time sewing, crocheting, etc. She also excelled in the culinary arts. After Mr. Vasey's death she joined a ladies' group who met weekly to quilt. One of the group was her very good friend, Mary Bowtell. Mrs. Vasey developed a heart condition which finally took her life on her son's birthday in March 1971.

Cecil married Mary Mix, who was raised in the Vermilion district. They have always lived in Edmonton, and have three daughters, Barbara, Lorraine, and Christine. Lorraine has two children, Robert and Deena. Alma married Ed Chessick, who was born in Vermilion, Alberta. They lived in Edmonton for several years, moved to Winnipeg, then Brandon and now reside in Coquitlam, B.C. Alma and Ed have two teen-aged boys, Mark and Murray.