My second name may prove somewhat confusing to readers, but it was my mother's maiden name. It may also sound odd to say that "winter arrived in Napier, Ontario on August 14, 1880", but if you capitalize the "w" you'll realize I was born on that date. My brother had gone to British Columbia in 1893, and in 1895 or 1896 he visited home. He and I were good pals, and we got to corresponding back and forth. Consequently, in 1898, I went to the ranch where he worked. It was mostly range land for cattle, but grain was also grown, and I, too, got a job there.

In 1900 I began drifting - to such places as Vancouver, Seattle, and Tacoma, Washington, and then it was back to B.C. for awhile. There I met my first wife, whom I married in 1906. We farmed on rented land west of Drumheller, Alberta. Six months after our marriage she died of a ruptured appendix, at that time called inflammation of the bowel. The fall of 1907 I went to Saskatchewan for harvesting. On the way home to Calgary I met some fellows going south to Montana. I joined them, and we took any work that was available. I stayed in Montana until the spring of 1916, then returned to B.C. 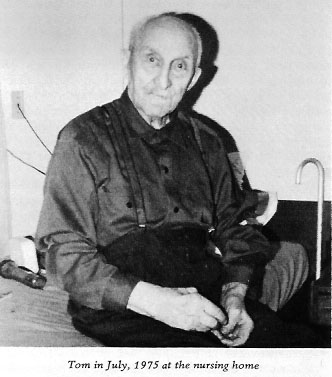 While on a visit to Ontario, I met my second wife. We were married in 1919. From that marriage there were three children; Gordon in Seattle, a daughter living near Detroit, and a daughter in Calgary. At the time of the 1918-19 flu I was at Carstairs operating a dray line. We would sometimes wear gas masks when helping those who were sick, hoping that they might in some way protect us. I delivered groceries to households where everyone was sick.

In the south I had become acquainted with Aubrey Prowse, and I later came to visit my friend south of Heinsburg. Then, in August of 1939, I moved to the Messer quarter north of Laurier Lake. My sheep flock numbered about four hundred, and I was there until 1945, when I moved to the old Craig place five miles north-west of Vermilion. There I also raised sheep for about five years. Walter Swan shared his home with me for a few years, then I went to Hazeldine. From there I took up residence in the Vermilion Block in town for seven years. Later I spent a few years in a private home, also in Vermilion. At present I am a guest of the Alice Keith Nursing Home in Vermilion, having been here since July 14, 1972. On this day, July 22, 1975, I am in fair health, enjoying a number of plants in my room, a testimony to my "green thumb". I am looking forward to celebrating my ninety-fifth birthday in a few weeks.