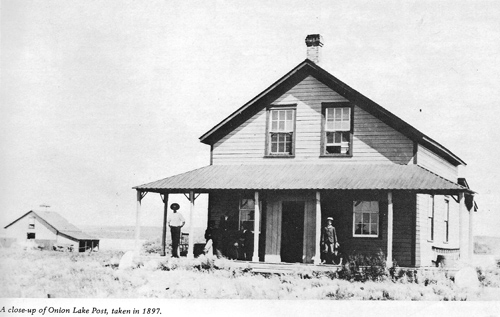 In 1894 Superintendent Howe reported - In January last, I ordered Sergeant Hall to proceed to Saddle Lake, as the Indians were reported at that place and at Whitefish Lake to have been killing cattle. Upon Sergeant Hall's arrival at Saddle Lake he found the report to be true and he and his men at once left for Whitefish Lake to interview Chief Pakan, who informed him that the Indians had been killing their cattle against his (Chief Pakan's) wishes. While on this subject and for the benefit of the uninitiated - the government some years ago gave the Indians a few head of cattle each.

(Editors Note - This was also done at Frog Lake Reserve and the same problems arose).

The cattle increased. Although the Indian claims these cattle as his own, he has no right to kill or dispose of them in anyway without permission from the Indian Department through their agent. Chief Pakan asked Sergeant Hall if he would speak to the Reserve Councillors. Meetings were held at Whitefish and Saddle Lakes; the Indian Agent, the ProÂ­testant and Roman Catholic clergymen were present; and I am glad to say that not a single instance of cattle killing has occurred since.

At Frog and Moose Lakes there are about 100 Indians who make their living by hunting. They have done well during the last year; game of all sorts being plentiful and their catch of fur being far in excess of former years.

Sergeant Hall, with his men, makes regular patrols of the Reserves and at once takes notice of any trivial trouble that may arise among them. I should like here to mention to you, Sir, of the excellent service which has been renÂ­dered the department in this district. Staff-Sergeant Hall has been stationed at Onion Lake for a number of years, and by his honest, manly and straight forward dealing has gained the confidence and appreciation of the entire popuÂ­lation of the district, and especially that of the Indians.

Sergeant Hall and his men are treated with the greatest kindness and respect by all the Indians in this great lone land and the constant visits of this intelligent non-commisÂ­sioned officer and his men amongst the numerous Indian bands, has the desired effect of keeping down crime, and affords the Indians means of having any little difficulty adÂ­justed when occasion requires.

Assistance to the Indian Department when called for: Sergeant Hall furnished an escort and accompanied the agent through all his Indian treaty payments and remained on duty until all payments were completed. Everything passed off quietly and the Indians seemed contented and well satisfied.

In 1895 Staff - Sergeant Hall, in charge at Onion Lake reported - Moose, Long and Frog Lakes â€” At these places there are about 150 Indians and Half-breeds who make their living by the chase. Quite a number of them have a few head of cattle and put in a small garden of potatoes, which turned out very well this year, this, with the supply of fish, enables these non-treaty Indians to make a fair living.

Their hunt during the past year has proved to be successÂ­ful, besides, a trader named Labracan, from near Victoria, is living with them and they can get goods much cheaper. It is noticeable the reliance these nomadic Indians place in the police and refer to them when in doubt. There have been no diseases among them and only two deaths from natural causes.

Rabbits are again numerous but prairie chickens are very scarce for some unknown reason. From present indicaÂ­tions fur-bearing animals will be plentiful this winter.

These districts are visited every six weeks. They receive no government aid.

In 1887 Staff-Sergeant Hall's report stated that, at the Chippewayan Reserve, two horses became sick and it was reported to him that they had glanders. For safety he isoÂ­lated the two horses, although he thought the disease was nasal catarrh, caused by exposure. No more symptoms were reported.

There were no prairie fires, and no breach of the liquor law, fish plentiful, prairie chickens and rabbits scarce. OutÂ­look of scarcity of fur-bearing animals. Rations are re ceived from troop headquarters at regular intervals, they are of superior quality and an ample supply is always kept on hand; the supply of good quality hay is adequate.

The men's kits on this detachment are complete; their arms are kept in good repair, I inspect the arms weekly. The conduct and discipline of the men are very good. The transport is in good shape. I had it painted during the spring. Saddles and harness are in good repair and are kept clean and in good order. The horses are always well looked after. Although doing some hard work they are generally in good working condition.

The number of miles travelled by the detachment during the year was fifteen thousand, eight hundred and sixty- three. Throughout the whole district the police are treated with the greatest respect.

The detachment has frequently been visited by an offiÂ­cer, and a thorough inspection held at each visit. I am glad to report the absence of crime in the district. No doubt our system of patrols has much to do with this, and I have no set times for visiting anyone place and am apt to turn up almost anywhere in the district unexpectedly.

In 1898 the expected shortage of fur-bearing animals occurred at Frog Lake and fish were not as plentiful. HowÂ­ever their health was good and there was no crime amongst them.

On July 20, 1909, Staff-Sergeant Hall removed the bodies of the victims of the Frog Lake massacre of 1885 from the old over-grown cemetery and placed them in a new cemetery at Frog Lake located on the north-east quarter, section 10, township 56, range 3, west of the 4th.

Staff-Sergeant Hall retired to pension at Battleford on April 16th, 1910 intending to reside at Onion Lake. He died at Onion Lake on February 14, 1926. His widow and children remained at Onion Lake where Mrs. Hall held the position of Postmistress for many years.

Correspondence on file indicates that Mrs. Hall was still living in Onion Lake in 1941. 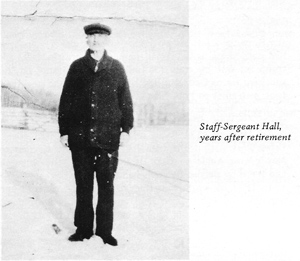 It has been brought to our attention that Mr. William Giles operated the first flour mill for the Onion Lake Indian Agency.