This article is based on information supplied by Neal Edwards,
Gerald Stults, Homer Campbell, Frank Malonek, and Ben Timanson

Three stampedes (in the early 1920's) were held at a site in the vicinity of what is now called "Lakeland Ball Park." The corrals were located to the west of a jackpine ridge running through the sand plain, with the race track extending into the ball park area. A farm organization at Lindbergh talked of putting on a stampede but, because of differences in opinion within the community, a picnic was held instead - at the Anderson farm, at the top of the Salt Plant hill. Consequently the wheels were put into motion to organize a stampede on the Lake Whitney site. Barney Edwards, Clifford Stults, Colonel Frisby, Leo Apperson, Mr. Sterling, Bill Crook, and no doubt others not named here, helped build corrals, make necessary arrangements, and operate the show. Some referred to the event as the Mooswa stampede.

There were numerous horses in the country in those years, with many running the range. Some were simply rounded up to be used and later released. Other were supÂ­plied by specific owners. Once it was advertised that strays were needed the call was answered by those who hoped to win the ten dollar prize paid for "the best bucking horse." Ellis Thomas, south of Whitney Lake, supplied Aberdeen- Angus steers. One of the riders who participated was Roy Johnson, whose wife also rode. In 1930 he was living at Meadow Lake, Saskatchewan. R.K. Martin, Ferguson Flats teacher, specialized in steer riding. Among the other particiÂ­pants were Lester Plummer, Billy Isert, Charlie Grant, Jim Howse, Basil Allard, Emil Kerslake, Tim Bootsman, Benny Timanson, and the Butz boys, Jimmy, Pat and Dorsey. Jim Howse proved very adept at roping dogs that got in the way in the corrals.

There were other events during the day and evenings. As was mentioned before there was racing, and one year there was a barbecue. A pit was dug and a beef was cooked overÂ­night on the coals. One event that we do not see at present- day rodeos is the prize fight. In the evening a promoter from the Elk Point - St. Paul area brought in a trained fighter. A prize of one hundred dollars was paid to the man who could stay in the ring with him for a specified time. Here again names come to mind - men like Jimmy Plaine, Phil Kirkham, Eddy Wise and Albert Hammond. Open air dances ended the day's festivities. 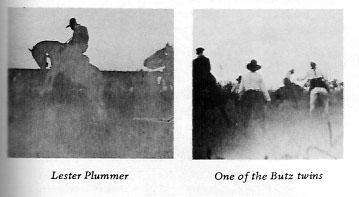 It would seem that financially the stampedes just couldn't meet all the involved expenses. The grounds lay along the main trail which ran back of the corrals and many would refuse to pay their way in. Later, however, they would come in at another place as non-paying spectaÂ­tors. Souvenirs of those early stampedes are still highly prized today. Jim Howse gave Homer Campbell the riding belt he wore for support. Gerald Stults got a pair of Merle Meyers spurs from Ben Howse. One was bent when Merle's leg was broken, riding for the saddle bronc championship at Calgary in the 1920's.

One of the better known bucking horses was Barney Edwards' Moonlight Sue, a medium bay that was built like a race horse. As far as is known Ben Timanson was the first person to get on her. She was a trial horse, and in the draw for names she was the one he drew. Barney told him he thought that "she'd either buck or run like h- - -." Ben's ride was made at the first Whitney Lake stampede, and he ended up by landing on the top rail of the corral. At that time you had to ride a horse to a standstill to be rated a winner. Ben believes he would have qualified if the ride had been timed at eight seconds as it is today. He thinks that Emil Kerslake was the one who finally made that "sucessÂ­ful ride." 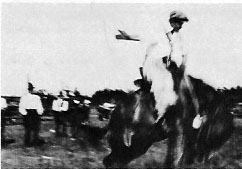 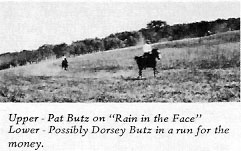 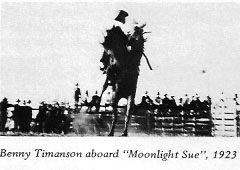 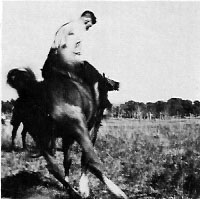 Some time later, when Moonlight Sue was in the Edwards barn, it was noticed that her neck was swelled. She was turned loose and it looked like she might have to be shot for coyote bait. She disappeared for a time and it was assumed that she had gone off and died. However, she turned up around Elk Point, fat and slick, with her neck back to normal. She led the herd and was very difficult to run inâ¢.