The two years that I taught at Lake Whitney School were truly happy ones. The children were all so co-operaÂ­tive and anxious to learn that seldom were there any disciÂ­pline problems. Teaching aids were unheard of in those days, and even extra reading material was limited as we did not have access to a library. However, we shared books brought from home, and the class always enjoyed a chapter or two read to them each day from such stories as Black Beauty, Anne of Green Gables, and Treasure Island. Finding time to cover the prescribed work for each grade was sometimes difficult, for even though the attendance was small I had almost as many grades as I had pupils. The senior students were quite willing to stay after school for extra lessons when needed, and their hard work brought very satisfying results. In 1930 Neva Crook and Ernie Woods wrote and passed their grade eight departmental examinations, and the following year Ernie passed his grade nine. 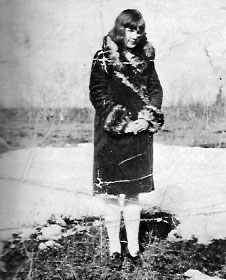 Our Christmas concert was one of the highlights of our school year. Our programme consisted of plays, pantoÂ­mimes, drills, songs, and recitations, and having such a small number of pupils, each one had to take part in several of the items. They were all so keen that they spent most of their recesses and lunch hours the last six weeks or so before Christmas learning and practicing their parts, and helping to make costumes and decorations. We were fortuÂ­nate to have Ernie, who played the violin, accompany our singers and play the marches for our drills.

In the fall of 1930 the "Depression" was upon us and cash was just not available for the things we needed for our concert, such as crepe paper, tinsel, candles, etc., and treats for the children. Hoping to raise a few dollars to cover these expenses the parents and I put on a dance in Heinsburg. We had a good crowd and since Fritz Kjenner did not charge us rent for the hall, and Gerald's orchestra donated the music, we did exceptionally well. Not only did we make enough money to pay for the things we needed, but there was enough left over to buy a gift for each pupil, and also for each preschool child in the disÂ­trict. Once again the children worked hard learning their many parts, and they put on another good performance for their parents and friends. When the concert was over the desks were all piled up along the walls and we all danced 'til the wee hours of the morning, stopping only long enough to eat a delightful midnight lunch provided by the ladies of the district. 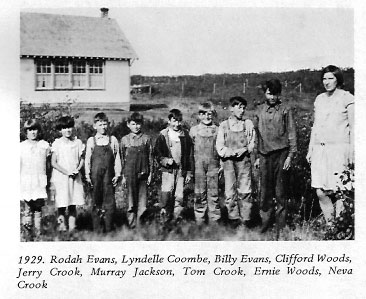 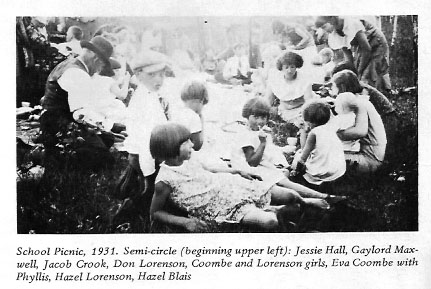 Lake Whitney, which was only a short distance from the school, was an ideal place for our closing day picnic. All the children's relatives and friends arrived and we spent a most enjoyable afternoon playing games, pitching horseÂ­shoes, paddling and swimming in the lake, and visiting. Then came the time we were all waiting for - our picnic supper. Each family brought a box containing all kinds of homemade "goodies" such as casseroles, sandwiches, pies, cakes, and cookies; and these were shared and enjoyed by everyone. We went home that night very tired but certainly not hungry.

I often think of those days. The children asked for so little, but seemed to accomplish so much. It's hard to beÂ­lieve that most of them are now parents, and some even grandparents. I still think of them as they were then. They were my children, at least while at school, and I will always treasure the experiences we shared.