I was born on the homestead one and one half miles southwest of Marwayne. I went to school for about a year at Stretton School. In 1920 we moved to Gilman, Illinois, U.S.A. where I went to school for about a year, then we once again went to Onarga, Illinois, U.S.A. where I got the rest of my education. The last two years at school I took as one subject Manual Training, better known as carpentering, which in later years helped the money situation when times were pretty rough.

In the fall of 1929 we moved again, this time back to Canada and settled in the Frog Lake district. We left Onarga, Illinois U.S.A. in two Model T Fords with camping equipment. The rest of our belongings were shipped by train to Marwayne. The trip took about two weeks. We travelled through Iowa, Minnesota, North Dakota, crossed the U.S. border at Portal into Saskatchewan, through SasÂ­katoon to Lloydminster. We had a very good trip - only one flat tire. 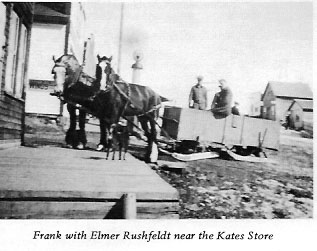 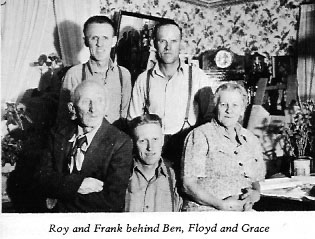 We lived at Frog Lake until the spring of 1935 when we moved to Heinsburg to the farm I had purchased the spring before, on the E1/2-55-4-W4th. I broke a lot of my land with horses, later I hired it broke with a tractor. Over the years I did quite a bit of carpentering, also worked in the elevator in the early 1940's. At about this time I did the local barbering in Heinsburg every Saturday night. After I quit barbering in Heinsburg I worked in Marwayne SaturÂ­day evenings, also in the summer when the barber himself, went on holidays.

In the summer of 1957, when they were building highÂ­way 45, also the Lea Park Bridge, and putting in sewer and water, the barber took off for three weeks holiday. I was really busy looking after the Pool Room and doing barberÂ­ing until midnight every night. I sure was glad when that last day came. I needed a holiday myself after that, but didn't have time, as my summerfallow needed working pretty bad.

As time went on and I worked in Marwayne I thought it a pretty good place to live. In the fall of 1971 I purchased my home in Marwayne where I still live. George Bendixen is farming the land at Heinsburg.