As Bob has told you, it was in 1934 that Dad bought the farm. In September he was going to teach at Middle Creek, so he had only two months to build a house, chicken house, and barn, and dig a well, etc. He built a long house in the side hill, with the wall against the bank. It was one hundred feet long. The living quarters were at one end, then a utility room, a chicken house, and a cow and horse barn at the other end. Mom, Dan and Billy stayed there and looked after the farm, while Bob and I went with Dad to Middle Creek to attend school. We came home over the weekends if we had a ride; if not, we stayed and Dad would walk home.

One night in 1936, Dan rode into Heinsburg, and coming home his horse ran away with him. It ran into a car coming around a curve in the road by Clarence Schmidt's. Dan's leg went through the windshield and was broken in two or three places, with the flesh and muscles badly cut. A matÂ­tress was put in the back of a truck, and they took Dan to Elk Point hospital, where Doctors Ross and Miller not only saved his life, but also his leg. He spent a long time in the hospital, and a long time on crutches after he got home.

All our lives weren't mishaps and accidents, though. ReÂ­member going to Ross Lake on Sundays? Most of the comÂ­munity came; there was swimming, ball games and fun. Nearly everyone brought a picnic supper, and we would put all the food together and have a real feast. Didn't those new potatoes and cream taste good? And the fresh green peas, and the corn on the cob? We'd boil the corn in a wash boiler over a campfire, then eat corn and fresh butter. Afterwards, more than likely, we'd have a corn cob fight. Coming home in the lumber wagon, the little ones would just lie in the bottom and go to sleep. 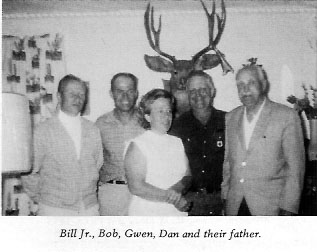 Dan and his wife, Marie, live in Edmonton at the present time. Bill, a doctor, is married and lives in California with his wife, Darlene, and their three children. I married EdÂ­ward, Hilda's brother, and we live and farm in the Ferguson Flats district.