William Daniels was Metis and born in 1885. He grew up around Frog Lake and married Eliza Horse daughter of Chief John Horse. He and his brother Charlie joined the first world war to fight a whiteman's war that they never really understood. Billie came back, but Charlie was killed in October 1918, less than a month before the Armistice was signed on November 11th, and was buried in Flanders Field. 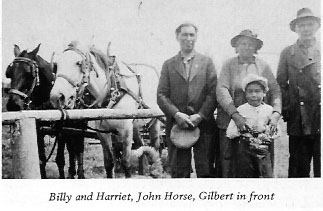 After Billy returned to Frog Lake he worked for diffeÂ­rent people. He loved carpenter work and helped build Berg's store, and several other buildings in Marwayne when the town was established in 1926 or there-abouts. Some of those old buildings still stand in there to-day. He also worked on the Riverview Hotel for Mr. Chartier and helped build the Roman Catholic Church in Heinsburg that was later moved to the Frog Lake Indian Reserve. In later years he made built-in cupboards for Mr. and Mrs. Jenner in the house they bought from Gib Evans.

Billy, along with others, worked hard to get the Fishing Lake Colony formed and when this was accomplished he became a member of the board.

He and Eliza had four children; John, Charlie, Thomas and Gilbert. Thomas and my brother, Johnny Quinney, joined the army together in the second world war. They both returned but Johnny was wounded in the foot while in action in Italy. Tommy was killed a few years later in a traffic accident at the corner where the Frog Lake store is now. After he was killed stop signs were put up at all four corners of the cross-road. Tommy left small children and his wife Mary Jane.

Gilbert was quite young, about two years old when his mother passed away in 1938. That same year Billy married my mother, Harriet Quinney, widow of Charlie Quinney and they lived at Fishing Lake. Mother bought out of the reserve, receiving the allotted sum of $50.00 and gave up her Indian citizenship and the reserve privileges. 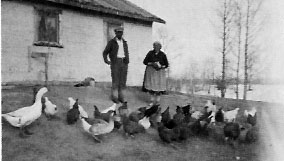 After mother passed away Billy's health began to fail and he spent much time in Elk Point Hospital. He was a very good friend of old Dr. Miller. Billy also became a patient in the Colonel Mewburn Veteran's Hospital in Edmonton. He became blind for sometime before he passed away and was laid to rest in the Frog Lake Indian Cemetery.