Jack George and May

My grandfather, George Jack, was born in Dundee, Dumfrieshire, Scotland in 1840 where he remained until he was twenty-five.

In 1861 he married May Gardiner, born in 1835. One son George and a daughter Jessie were born in Scotland. Jessie married George Hall in Ontario, Canada.

In 1865 he immigrated with his family to Toronto, Ontario. He was a cabinet maker by trade and thus earned his living in Canada for several years. Three more children were born; David, married Martha Christ and they became my parents, Mary, married Olaf P. Smith, and Isabel married Albert Christ. 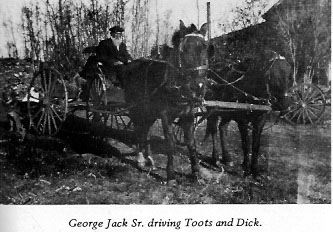 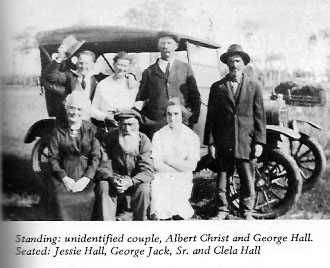 He moved from Toronto onto a farm near Sprucedale, Ontario until he came west in 1912. With him came George Hall and Albert Christ who bought a farm five miles north of Kitscoty, Alberta. Many old timers from north of the river stopped over night with Isabel and Albert Christ when they hauled grain and supplies to or from Kitscoty. Many a night their home overflowed with people, and bedding which most of them carried with them was unrolled and slept on under the kitchen table. At times the stable was used for sleeping quarters.

My dad bought a farm south of Kitscoty but Grandad and George Hall went on to Frog Lake in 1913 and homeÂ­steaded there, Grandad on S.E. 35-56-4-W4th. In April 1914 my mother and children joined Dad at Kitscoty.

In 1915 I applied for a homestead, N.E. 26-56-4-W4th meridian. I suppose it was because Grandad and sister Jessie was there. I stayed there a couple of winters and did some brushing but as I did not get there in time or stay the required length of time a Mr. Litchfield filed on the quarÂ­ter. I let it go and bought land south-west of Kitscoty, a venture that proved successful. Fred, Earl and Lorne Granger from Frog Lake worked for me at times and Lorne married my oldest daughter, Ada.

My dad bought a quarter from Abe Granger's father at Laurier Lake in 1915 or 16; we had it for several years and sold it to one of the Bristows, I think his name was Fred. It's about fifty-five years since I was in those parts. This land was too far from railroads, Kitscoty closer.

After Grandad retired he spent his time between George Hall's at Frog Lake and my dad's at Kitscoty. He passed away at Kitscoty in 1928 at the age of eighty-two.