by Neva, Claire and Tom

Dad was born in Nebraska in 1878, and Mom (Molly Jackson) in Kansas in 1879. They were married in the Indian Territory of Oklahoma. Many people were coming to Western Canada, so in 1903 our parents arrived in what was then called the Northwest Territories, with two small boys. They homesteaded at Ponoka, where Dad helped build the mental hospital. While there, Claire, Ralph and Billy were born. At the farm, wild animals such as lynx would come right up and look in the windows, so Mom had her problems, with little children to watch and the man of the house away. They let that homestead go and took out one at Bashaw. Dad worked at different jobs; then in 1911, when the railroad came through Mirror, we moved there, the birthplace of Neva, Tom and Jerry. Dad had a livery barn and dray business in the town and raised beautiful Percheron horses. A lifelong fondness for mules was eviÂ­denced by the fact that he had a team of them as pets until the day he died.

Max left home at the age of fifteen for a job on the railroad. In 1922 the rest of our family moved to Mooswa, in covered wagons, trailing a herd of horses. The cattle were shipped by rail. We lived in the Stonehocker house north of Lindbergh for two years, then returned to Mirror for one winter. Back at Mooswa, we lived in the Powell house east of Lindbergh. Our next move was to the Lake Whitney area, first on the Borger place, then in the Gordon house. When Coombe bought that quarter, we moved to the one that cornered it on the northwest. We farmed the land and in 1931 Dad was assistant to Gib Evans Sr. on the Heinsburg ferry. 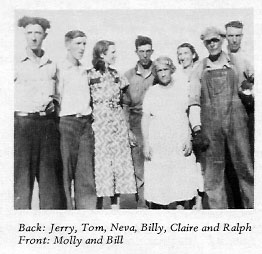 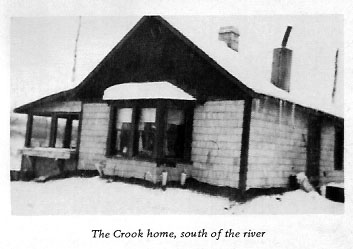 Grandad Crook had come to Alberta after our grandÂ­mother died. He came to live with us at Whitney Lake and spent many hours ice fishing, setting out each morning, his lunch with him. In the mid-1930's he passed away and was buried at Mooswa.

We left the farm and moved to Heinsburg in 1933. After a year's absence from the ferry, Dad rejoined Gib Evans on the job until the fall of 1935. Once more he missed a year, then worked with Gib from 1937 to 1940 inclusive. We lived in a log house on the south side of the river. Mom pasÂ­sed away in June 1939 at the age of 59, having been very devoted to her family. Jerry and Tom stayed on with Dad.

After Dad left the ferry job, he, Tom and Billy went out to Powell River, B.C., where they worked in a logging camp. Two of the boys left Alberta by train, and getting off at Yale, B.C., they sat down on the hillside. They had nothing to eat and they wondered how they would get to where Dad was. As they pondered, who should appear but Uncle Hank. He didn't know they were around, so everyone was very surprised. 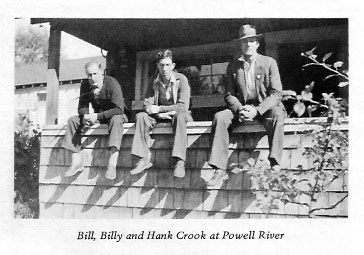 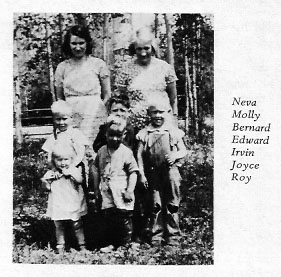 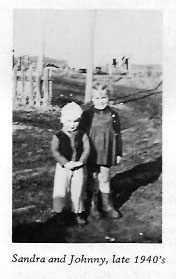 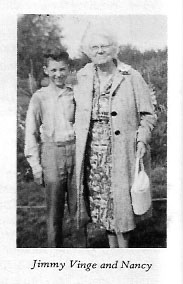 In the mid-1940's Nancy Owens came to Heinsburg to keep house for Dad, and they later married. She had a great sense of humor and used to do teacup reading for her friends. Their closest neighbors were Evelyn and Edsel Jones and their four children. Dad was head ferryman from 1944 to 1948, at which time he retired on pension. His birthday, August 20, 1952, was a very hot day. Two of the boys came up and took him fishing. He decided to go in the water and, upon doing so, he suffered a fatal heart attack. Both he and Mom are buried at Frog Lake. Nancy stayed on at Heinsburg until the bridge was started, then moved to Sydney, B.C. She passed away there in 1974. As of 1975 there are 24 Crook grandchildren and 8 great- grandchildren.

Max married Winifred Oldring of Mirror and had two girls. He died fourteen or fifteen years ago. Winifred still lives in Mirror. Claire married Ed Klinkner in 1926 and they operated the Lea Park store and post office. Their family consists of five girls and one boy. In later years they had a home in Edmonton and both worked for a bridge repair crew. When Ed died, Claire, left with the two younger girls, moved to Marwayne. She later married George Perks, who died in November 1972. She now works at the Sheltered Workshop in Lloydminster.

Ralph worked in Heinsburg on the ferry and in a garage. Later he operated Imperial Lumber stores in Heinsburg and Lone Rock, and a Nelson Lumber store in Edmonton until his retirement. He married Elsie Emery. Their daughter Sandra and son Johnny are both married. Ralph and Elsie live in Mirror. Billy married Dot Lorenson, who had two girls and a boy from her marriage to Steve Pankiw. She and Billy had two boys of their own. They lived in Salmon Arm, B.C.; then Billy operated lighthouses on the Pacific coast. In September 1972 he fell when a ladder slipped as he put window screens on their home. A week later he passed away. Dot has since remarried.

Tom has never married. While at Heinsburg he worked on the ferry and "coaled" the train. He then worked at the Wainwright Army Camp, but now is caretaker at the CenÂ­tennial Mall in Edmonton. Jerry, married to Megan Dudlyk of Marwayne, has four girls and two boys. He worked as a carpenter in Edmonton and Salmon Arm, and now is emÂ­ployed at the Mica Dam, with their home still in Salmon Arm. Neva, married to Oscar Vinge, now deceased, has five children. Their story will be told in detail in the followÂ­ing chapter.

Here are two memories we would like to share. In 1926 or 1927 Dad was coming home in his Ford that had no lights. At the creek crossing, near the Salt Plant service station site, he missed the narrow bridge and ran into the water. Crawling out, he proceeded to walk home. Harry or Art Bowtell came along, and thinking Dad was still under the car he asked Mrs. E.T. Evans to break the news to Mom. She came to our home but before she could say a word Dad walked out of the bedroom.

When the railroad was being built from Lindbergh to Heinsburg, Harry Bowtell supplied meat for the camp. He would bring it as far as our place, then Neva would take it the rest of the way on horseback. When the job was done he brought her (in her mid-teens) a pair of silk stockings. This was something that every girl dreamed of having, but Mom would not hear of her accepting such a "personal" gift from a man, and that closed the subject. Times have certainly changed! 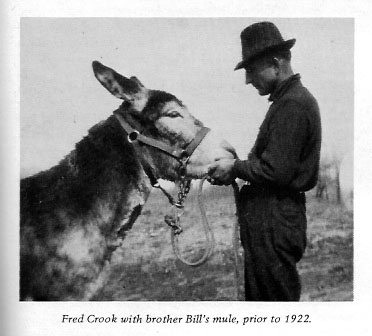