I was only ten years old when my folks moved into the Frog Lake area. We lived in a house on the north end of Laurier Lake that belonged to a bachelor, until my dad built our log house on his quarter of land adjoining on the north. Times were very hard and we kids had to walk to school. We would leave long before daylight and arrive home in the dark during the long cold winter months. The school then sat on the (SE-24-56-4-4) corner of the Frank Bristow farm.

When I got into my teens I would walk to the school, on Saturdays and Sundays, to play baseball. In winter we played hockey on sloughs. We boys in the Frog Lake area got up a hockey team, and drove to various places by team and sleigh to play hockey games. Sometimes these games were on a slough, if there was no regular rink made. There was no such thing as inside hockey arenas at this time. I worked for various farmers trying to earn some money, but pay was very poor those days. The most I ever made was $6.00 per day in the fall of 1923, when I went to Alsask, Saskatchewan, to join brother Fritz, who was already workÂ­ing there. After harvest was over I returned home, to work around Frog Lake, and a group of us young and older folks got together and put on a three act play in various commuÂ­nities. We raised some money this way to start building the Frog Lake Community Hall, which was completed in 1934.

In 1932, I married Wilma Salmon of Ferguson Flats. We had a family of four, one boy and three girls: Einar of Campbell River, British Columbia; Lois, of Heinsburg, Alberta; Doreen of Elk Point, Alberta; Carol of Decker, Manitoba. After we were married we stayed with my folks for a short time until I could get a house built.

I took out logs and had them slabbed on four sides. In the summer of 1935 the wife, Lois and Einar, both babies then, camped in Martin Reitan's shack, while I broke some land for Martin. In return he grooved out the logs and put up the four walls of our house. Nels Litchfield made the two doors and helped me put the roof and shingles on the house. I bought the five windows and Nels also put them in. We couldn't afford gyproc for ceiling and partitions so we bought enough grey paper by the rolls, and nailed it onto strips of boards for the ceiling. The logs inside were also covered with the same kind of paper. We then bought the cheapest paint to brighten the paper up. We had an air-tight heater and a cook stove for heat. They had to be kept filled with wood all night to keep things from freezing. One winter we had frozen potatoes in the cellar.

Our little cupboards were made out of wooden orange and apple boxes. Our chairs were wooden pop cases standing on end. As I mentioned before these were hard times, but everyone seemed happy. Everyone drove horses during these years, but we did a lot of visiting between neighbors, playing cards in the winter, and there were always the picnics and ball games in the summer. 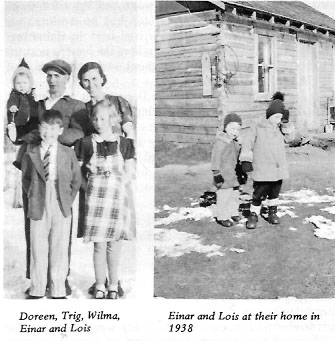 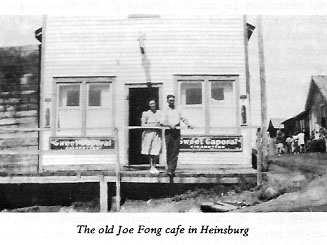 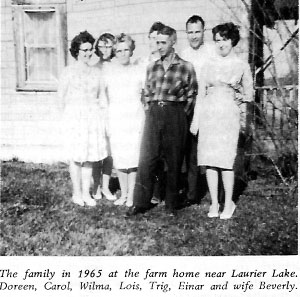 We tried mixed farming, and also sheep raising, without much success. The dry years didn't bring much for crops, and the coyotes were hard on the sheep. We decided to sell them and tried restaurant business, renting the hotel premises from Paul Buck in Heinsburg. Things went fairly well, but it was long hard hours, so in the fall of 1947 we sold what little bit of household belongings we had and went to British Columbia. This was a bad move for us, as I didn't like the rainy weather, and had no work, so we only stayed a short time. We arrived back in Heinsburg, buying the old cafe, which stood where the present post ofÂ­fice now stands. We sold it in about two years time, and bought the Frank Madvid farm.

In 1952 I took a job with the Department of Highways maintaining roads, working at this for thirteen years. In 1965 when an advertisement came out for a manager for the Government Store at Fishing Lake, I applied, and reÂ­ceived the position, working until I took sick and had to retire in 1971. We now make our home at Buckingham House in Elk Point, having moved there from St. Paul.