by daughters Alberta, Amy and Mamie

Our dad, George Dewey, was born at Granite Falls, Minnesota, U.S.A. in 1887. In 1908 he married sixteenÂ­year-old Kittie Bell Fox, who was born in Hewitt, MinneÂ­sota. Shortly after their son Archie was born in 1909 they left the States and settled down to farm at Youngstown, Alberta, where the rest of their family were born.

Each year south-eastern Alberta seemed to become drier than the year before, until it was impossible to make a living on the farm, which was the way they wished to live. They began to look northward, where they hoped to get away from the dust of the drought. They chose Frog Lake and arrived at the river just in time to be the last load to cross on the ferry in the autumn of 1922. We spent the first night at Carl Cameron's, on the old Millerkee place. The next day Carl helped us move to Charlie Gibson's north of where Donald Nichols currently lives. We knew the Gibsons when they, too, lived at Youngstown. We soon moved to the Bob Peterson placed on the south-east side of Ross Lake, and before very long our new neighbors began to call that stretch of lake shore "Dewey's Landing." 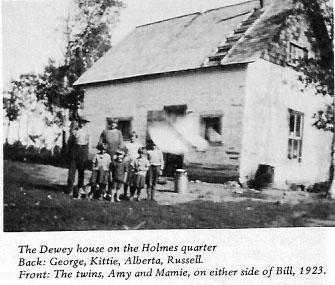 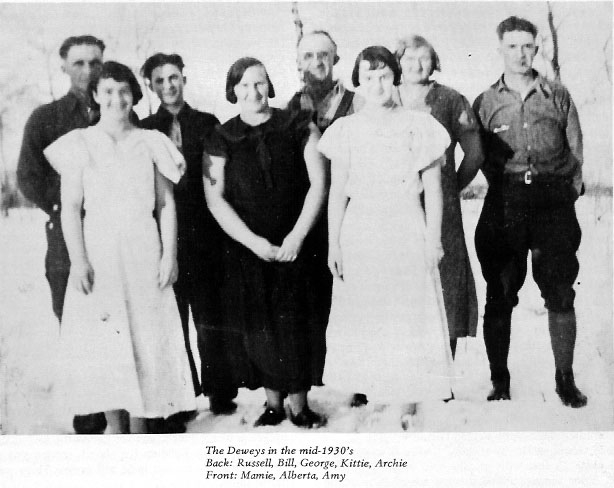 While we were still living there we began school at Martin School, which at that time was on the old Joe Martin place. Miss Dorothy Tennyson was our first teacher. We used to have some good times at school. One HalloÂ­we'en our teacher, Mrs. Beth Colpitts, gave us a party. Mother dressed up as "Maggie" in the comic strip "Bringing Up Father", our neighbor, Mrs. Ed Nelson, dressed as her husband "Jiggs", and they walked the two miles to the school. A lot of other parents were there, but Mother and Mrs. Nelson were the only ones in costume.

By then we had moved onto the Frank Holmes quarter, into the house built by a Mr. Lear, and Mother and Dad had settled down to make a home for all of us. Dad had a threshing outfit and each fall did custom work for the neighbors. At times he worked for one of the local storeÂ­keepers, Mahmud Rahall, mostly hauling supplies for the store, but at times he was asked to do other jobs there. One job he did was render down a quantity of butter; he had lost his sense of smell so didn't know until a long time afterward that the butter was rancid. After he found out he couldn't bring himself to even take a taste of butter.

The late Oscar Vinge often laughed about the bumpy roads that Dad had to drive the truck over when he went for supplies. Quite often a passenger or two rode with him. One time it was a lady who offered him a bite off her banana. Just as he opened his mouth for the bite the truck hit a bump, and into his mouth went all the banana. Well! What else could he do but eat it?

At the time Dad was working there Rahall's store was situated between Jack Litchfield's store on the east and Ernie Vasey's cottage on the west; the buildings were just a few rods apart. Harry Bowtell's family lived across the road at the bottom of the hill. A stray milk cow used to show up each morning. They never knew who she belonged to, but she obviously came to be milked, so the job was done â first come, first served. Since Bowtells were the only family who had milk cows the other three families were glad of a free milk supply. One morning, bright and early, Ernie saw the cow, grabbed the milk pail and rushed out. Jack's upstairs window opened, Jack stuck his head out and called, "Too late, Ernie! Harry Bowtell milked the cow." That really tickled Dad.

In 1928 Grandma Dewey (Eunice Arvilla Dewey, Dad's mother) came to live with us. She told us that the first Canadian home she stopped at she was asked if she would like a cup of tea. Where she came from they always drank green tea and she thought how good it would taste, but she was given a cup of that awful black stuff that she could hardly choke down. However, there was no green tea here and she learned to enjoy a cup of "that awful black stuff." Grandma lived with us until she passed away in 1942.

Money may have been scarce, but we enjoyed life without it. Shortly after we came, the twins, Amy and Mamie, and Billy played Indian. We hadn't been at Frog Lake very long and had never seen trees before, so we unÂ­dressed completely and ran around among the trees and through the bush singing like Indians at Treaty time. We will never forget the switching we got all the way back to the house.

Mother had helped out in the hospital in the south and knew a bit about being midwife. Many times she was called out to help deliver a baby. One in particular was a family who had camped on the hill above Harry Bowtell's. The husband rode horseback into the Acomb district to look over the homesteading situation there, as that was where they intended to settle. The wife took sick and sent her six-year-old boy down to Mrs. Bowtell for help. She immeÂ­diately sent for Mother, and they delivered the baby. The husband arrived back in camp about one in the morning to find a new baby and Mother still there. The next morning they moved camp into our yard where Mother could look after them. They were with us for three weeks. 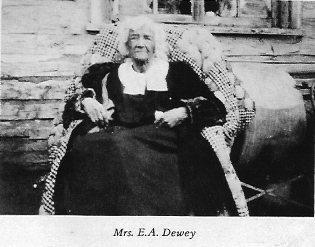 There was another time she helped Dr. Miller with an at- home delivery; the baby was stillborn. Mother prepared the baby for burial, and Dr. Miller took the mother to the Elk Point Hospital, where she passed away a few days later. One morning Mother caught the train for a trip to Elk Point. On the way she helped the conductor deliver a baby on the train. Mother also prepared neighbors for burial, as there was no undertaker available in those days. We can't rememÂ­ber her ever refusing to help out, but we know it was hard for her, especially when it was someone she knew and loved.

Dad and Mother loved company and took part in nearly all the community doings. Almost every weekend she packed a picnic lunch, and we joined the rest of the neighÂ­bors at Dewey's Landing for church service and an afterÂ­noon of swimming and local ball games. There were wonÂ­derful times.

We remember a big bush fire that was out of control by Ross Lake. We helped Mother fix a big lunch for those who were fighting the fire. We harnessed the team, then upon discovering that we had no wagon at home, we hooked them onto the stoneboat, covered the lunch boxes with a blanket to keep out the dust, and away we went. We remember how those tired, dirty men appreciated the food and drink.

In 1949 Dad took a trip to Windsor, Ontario and bought his first new truck -- a '49 Ford. He came home through Minnesota, the first time he had been back there since he had left in 1909. 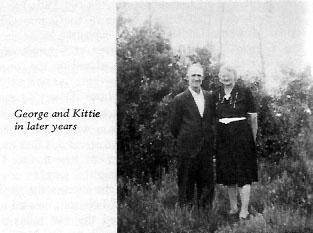 Brother William (Billy) joined the army during the war and was stationed in Holland for some time. He is a bacheÂ­lor and presently lives at Clandonald. Archie makes his home at Whitecourt, Alberta, as does Russell, who married Effie Granger. They have one boy and two girls. Alberta married George Lumley, Frank Lumley's son, of Green- lawn; they have three boys. Amy remained in Martin disÂ­trict, married Sam Krider and raised three boys and two girls. Mamie married Earl Granger; they raised three boys and three girls. She has since moved to Castor, Alberta and is married to Arnold Varney.