As far as we know, the only people of Negro ancestry who ever lived in our part of Alberta were Mr. and Mrs. J. Goins (spelling may not be correct), Mr. and Mrs. R. Atlas, Mrs. Keil, and her sister, Mrs. Eddy. The Atlases were reportedly from Jamaica. Both they, and the Goins couple, lived, at different times, on the quarter of land which includes most of Alma Lake (N.E. 28-55-3-W4). The buildings were located on the east side of the lake, about one half mile south of where Clyde Resler now lives. The Goins' were here in 1918 but the exact year of their coming is not known. Mr. Goins was very upset, to say the least, when the road was put through to the east of Alma Lake, cutting a strip off the side of his quarter. Harry Bowtell was road foreman at the time. Mr. Goins wanted the road to continue from the road allowance on the east of the Kinch !and, past Pynten's to the east, and on southeast to join the road leading to the present County line. 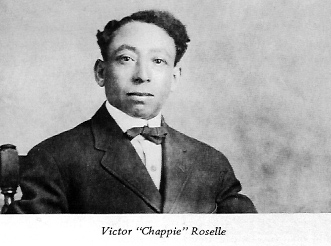 Mr. and Mrs. Atlas took over the Goins land in the very early 1920's. They raised sheep and horses. Once while taking a spirited horse to water he had wrapped the rope around his hand. When the horse bolted his fingers were injured, and as a result he had what was called "a bad hand" the rest of his life. The Atlases had worked for the C.P.R. There had been rumors of a railway coming through from the south, with a townsite to be located on the Jim Howse place. This may or may not have influenced them in deciding to come to the district.

They have been described by a number of people as very good neighbors. Mrs. Atlas had many shoes, fine dresses, jewellery, linen, and a silver tea service that was saved during their house fire because it had been surrounded by bags of flour. When the couple was asked out for a meal they would arrive dressed in their very best. They once got a dog from John Nichols. When asked how he worked, Mr. Atlas said, "I don't know how he would handle coyotes, but he can sure kill a collie dog!" When you went to their place the dog bore watching. When Cuba Nichols came one day, much to the surprise of the Atlases, he went up and licked her hand. They didn't realize who she was â but the dog remembered.

Mr. Atlas moved a house from the spot where the Syrians had a store, to a site nearly half a mile south. It was still sitting there on skids when he was involved in an accident that was to cost him his life. He had gone for a load of hay in the fall. Near Clearwater Lake a high wind blew the rack off the wagon, pinning him underneath. He was found by Mr. Keil and lay unconscious for over a week at his own home. One night Mrs. Helgerson who was asked to sit up with him, requested Befit Odegaarden to accompany her. He passed away on October 9, 1929 and his body lay, until burial, in the house he had moved. Victor "Chappie" Roselle was contacted at Humboldt, Saskatchewan where he worked as a handyman. He had been raised by Mrs. Atlas' parents. He arrived in a truck with a caboose on the back, in time for the funeral.

The Atlases were Roman Catholic. She was asked to have the funeral service at the Onion Lake church in the forenoon, but she insisted that it be held in their home "in the district where our friends are." She also asked that it be held at 2:30 p.m., a time she thought more convenient for her neighbors. Her husband was laid to rest in the Frog Lake cemetery. She left with Victor, and when they returned about two years later they were married. George Kinch was asked to help put pegs and a pagewire fence around the grave. As far as can be ascertained, neither returned again.