We landed in Heinsburg on October 2, 1930. We did enjoy our stay there until February 1937. We moved to Minburn, Alberta because that town had a high school. Our oldest son had been attending high school at Elk Point, and the other two boys would soon be at that level, too. Times were hard during the "Hungry 30's."

When we first came to Heinsburg there was no school there. My wife used to drive many of the children to Martin School in our car. There were the Gregor, Evans, Chartier and McMullen children, and our own four boys. The hamÂ­let residents finally decided to build a hall. We applied to the Minister of Education to form our own school disÂ­trict. I almost lost my job over this because C.N.R. paid the most taxes at that time, on what was the most valuable property. I was the chairman of the first school board, a position I resigned shortly before we left Heinsburg. 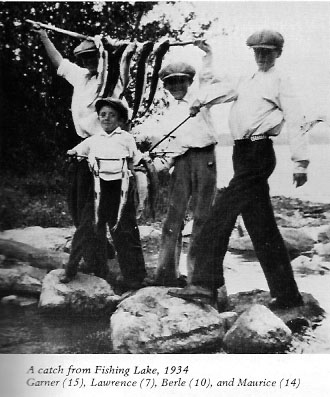 During the hard times I made many trips to the Elk Point Hospital. Some people did not have the money to pay for the trip, but I always took them, money or not. If I took a man along with me he had to be paid out of my pocket. I have never regretted my decisions for there has always been someone greater than us who has paid me back. I remember that one day at noon Oliver McMullen came and asked me to drive his wife to Elk Point after 5:00 p.m. Before I went I put on a new pair of chains, then took off for the Millerkee farm to pick her up. The roads were awful, and she was very sick. We almost did not make it up the Lindbergh hill. One of the chains broke, but we finally got to the hospital at 2:30 a.m. Mrs. McMullen had a ruptured appendix. The nurses made a lunch for me. I asked Dr. Miller where I could get some gas. When I went to where he told me the man opened the door but wouldn't let me have gas. Back at the hospital I told Dr. Miller what had happened. Over the phone he told the man that if I didn't get gas he wouldn't be selling any more for a long time. I got the gas I needed and got home in time to go to work. I was section foreman. The next day Oliver came and asked what he owed me. He said he only had two dollars but would pay the rest later. I told him to keep it â I wasn't doing it for the money. The chains and gas cost more than that, but I knew if he'd had all of it he would have paid me. I don't think I really lost anything for what I did. Times were hard; everything was cheap, but there was no money to buy with. 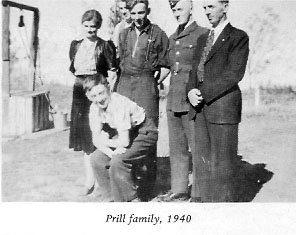 Mrs. Rinde from Norway Valley came to town to sell an 18 1/2-pound home-smoked ham. She had been all over town selling ham so she would be able to buy coffee and sugar. Mrs. Kates had told her to come and see my wife. When she came down my wife asked how much she wanted for the ham. "Do you think eighty-five cents is too much?" she said. "No," my wife said, and gave her a dollar for it. She left a very happy woman. In those days eggs were 44 a dozen, butter 94 a pound, wheat 184 a bushel, and oats 94.

I am past 78 and my wife is 75 (in 1975). We are not in good health. I had two light strokes, which have left my hand stiff and not working very well. Our boys were named Garner, Maurice, Berle and Lawrence. They were all in the Air Force. Garner was in many countries during World War II, and fortunately returned. Maurice was killed on December 14, 1943. Berle died January 19, 1943 in Germany. Lawrence was not overseas, but spent a total of twenty-four years in the service.