Bill and Katie Mykytiw were married on October 26, 1910 in the Ukraine. Their firstborn son, Ted, was born there, but he died in the first year of his life in the home country.

In 1913 Bill and Katie decided to leave their homeland and make a new life in Canada, where some of their friends and relatives already were. They arrived in Primula on September 17 along with Katie's father, Dan Hawryluk. With winter coming soon and no home they spent the first winter with Katie's brother John and family. Their second son, Walter, was born on February 6, 1914.

In the spring of that year Bill took up a homestead in the eastern part of the Primula district. They proceeded to make a home for their family. A little log cabin was built, a home to call their own. A bit of land was cleared for a garden, and a clucking hen set on eggs which were given by a neighbor. A cow was also acquired in exchange for work on the owner's farm. Now they were set for farming.

Even before the cabin was finished Bill had to go to work on the railroad, leaving Katie and baby Walter with Grandpa Hawryluk. Katie, being a healthy, ambitious young woman, proceeded to make mud plaster for the walls of the cabin, and plastered it inside and out. With Grandpa Hawryluk's help they put on the sod roof to keep out the rain.

Money was hard to come by, but where there is a will there is a way. Katie saw that seneca roots were plentiful and in demand, so daily she dug, washed and dried them. When she had a 100-pound sackful a neighbor going to Vermilion took the roots along to be sold. With this money he bought them 100 pounds of flour, 20 pounds of sugar, a pair of shoes, and a cowbell. Bill also made a bit of moÂ­ney, bought oxen, and started clearing land. Ten acres were cleared the first year. As time went on the cleared land grew, and so did the family. Four more sons were born: Nick on December 22, 1916, Jim on March 27, 1918, and Paul and Peter on March 15, 1922. Peter died within that year. 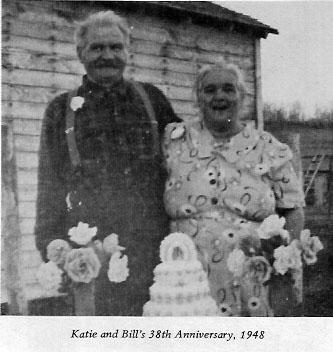 The homestead soil was not too good (a lot of muskeg), so they sold this land and moved to the northern part of Primula in 1928, along the North Saskatchewan river, where the soil was rich and the bush big. Again the clearing of land began. They built a comfortable log home and farmÂ­stead buildings. Bill was a talented man. He did carpenter work and was also a blacksmith. He did his own blacksmith work as well as for neighbors. He got a small sawmill and used his bush to advantage. It was here that I, their only daughter, was born on January 14, 1929.

We children all attended the Primula School. Walter showed an interest in music, so Bill made him a violin. He learned to play and brought many hours of enjoyment to himself and others. Later, noting his exceptional talent, his uncle bought him a new violin. All the boys learned to play some instrument and at a very young age played together as a band at dances and weddings. Paul at that time was only ten years old. Times were hard but the family worked together, happy and growing up. It was soon time for each to go on his own.

Bill and Katie both lived to see their children married and settled. In the fall of 1946 they moved to Lindbergh in retirement. Bill passed away in December, 1958. After this Katie spent two winters at Fairview with us. She moved from Lindbergh in 1960 and resided at Fairview in her own home looking after the flowers and garden, working in the soil which they had both loved. She passed away on May 31, 1975 after a rich and full life. She left fifteen grandÂ­children and twenty-four great-grandchildren â a wonderful heritage!

Walter took up some land near the Primula school. In January, 1936 he married Mary Yaremkevich. To this union were born four children; daughter Joy (deceased when an infant) and three sons, Eugene, George and Larry. 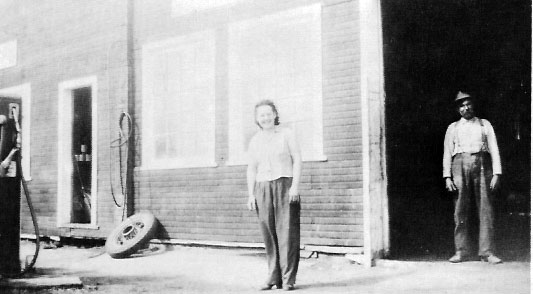 Mary at the garage. Andrew Buksaw in doorway.

Walter did not stay at farming. He moved to Heinsburg, where he bought a building and started a second-hand store. Then he bought a garage and put his talents as a mechanic to work. In time he sold the garage to his brother Nick and went into the hotel business. He bought a hotel at Donalda, then also one at Nelson, B.C. He sold these and bought the Cecil Hotel at Moose Jaw. To his many talents Walter added painting; he painted beautiful pictures in a style all his own. He resided in Moose Jaw until his death in January, 1964. His widow, Mary, still lives there, as do sons Eugene and Larry, who took over management of the hotel. George is in Vancouver.

Nick started his young life as a Watkins dealer at Smoky Lake. There he met and married Nancy Ottawa in SeptemÂ­ber, 1937. They had three children: Shirley, Dean and Gary. Nick tried his hand at various trades. He ran a second-hand store and also worked as an elevator agent. He bought the Heinsburg dance hall and also used it for a theatre on Saturday nights. Then he bought the garage from brother Walter and operated this for quite a few years. Then he, too, went into the hotel business. He bought the hotel at Rochester, just north of Edmonton. Nancy passed away in June, 1966. Nick sold that hotel and bought one at Daysland, where two years later he also passed away (May, 1968). Shirley and Gary live in Edmonton. Dean is at Taber.

Jim started as a farmer in the home area of Primula. In June, 1941 he married Anne Yaremkevich, and to them were born two daughters, Levina and Myrna. In 1949 the Peace River country attracted him. There he farmed, bought a general store, then an apartment block. He built a motel in Fairview; then, after he sold this, he moved to Kelowna, B.C., where he is now retired. Levina and Myrna also live there. Paul also started with farming a mile from the home place. In June, 1945 he married Audrey Tomko. To them were born three children; one daughter, Gloria, and two sons, Allen and Terry. Paul bought the home farm but then moved to Elk Point. While doing his farm work he drove a school bus. He bought a store and operated this for a time. When he sold the store and farms he went into the hotel business, too, at Fairview. After this he sold out and bought a motel at Grande Centre, only to sell again and move to Kelowna, where he is in semi-retirement now. Terry lives there also. Gloria is in Red Deer, and Allen is in Calgary. I married Stanley Sawak in November, 1946. We were blessed with four children; three daughters, Stella, Gail and Dianne, and one son, Gary. We started farming in the North Home area. The call of the mighty Peace River country appealed to us, so in the fall of 1949 we moved north and farmed there for a few years. Then, in 1953, we moved to Fairview. I worked part-time as telephone operator and bakeshop clerk, and now am a postal clerk. Stan worked in construction, and after taking a course in painting and decorating, has been employed by the Government of Alberta in that type of work. Stella is at Grimshaw, Gail is at Kelowna, and Dianne and Gary are at Fairview.

In August, 1975 the Cecil Hotel in Moose Jaw burned down and some lives were lost. Mary, Walter's wife, was knocked unconscious but was carried out by firemen.

Nick, prior to his death, had married a second time. After his passing Gary lived with his sister Shirley and her husband, Walter Filewich, for nearly two years. Walter succeeded Russ Phillips as manager of Imperial Lumber at Heinsburg. (Russ's wife, Yvonne, nursed at the Elk Point Hospital for a time). Gary married a girl from Devon and has two children. They live in Sherwood Park. He is in training to be a fireman. Dean lives on an acreage at Taber, working in the insurance business. He has two children of his own and three step-children.

Shirley taught school at Dewberry one year and at Hinton for a year. She then took nurse's training at the Misericordia Hospital in Edmonton. At present she has gone into real estate with Block Brothers in Edmonton. Walter got his R.I.A. (Accounting). He operated the Devon Hotel for five years, later the Redwood Park Motel in Victoria, and is now operational manager with Primco. Their son Ricky is still in school. Daughter Loretta formerly played flute, and now plays French horn with the All-Girl Drum and Bugle Band. She also plays several other instruments.