Back in the late twenties a few families were living about ten miles southeast of Frog Lake. They had children and no school to send them to. Ernest Charlton and Frank Brown were instrumental in working with the government to get this school started. Finally in the year 1930-31 grants started coming from the government and a school was built. On May 31, 1931 school started. Among the teachers who taught there were; Dean Colpitts, Harry McKeen, Mabel Kinch, George Douglas, Frank Walsh, William Smith. In those early days school was only operated during the summer months. Dean Colpitts taught for one summer, riding horseback from Martin School, about ten miles west, where his wife Beth was teaching. He often reminisces about those rides; the hawks swooping down over his head. He wore a straw hat with a big handkerchief to keep the mosquitoes from biting. Dean and Beth are now living in Edmonton. Harry McKeen became a doctor, married a nurse, and is now retired in Moncton, New Brunswick. George Douglas was Dean Colpitts' cousin, and is now a retired teacher in Moncton. Frank Walsh lives in Vermilion. Elsie MacLean was supervisor for a year, when teachers were hard to come by. The original Acomb School was closed, but years later it was reopened but in a different location, east of Clearwater Lake. Mr. William Smith taught there also. Albin Nelson was supervisor for at least one year. This school lasted for only a few years and then the children were bussed to Heinsburg.

Recalling some of the happenings, one really thinks those were the good old days; riding horseback six miles every night and morning; getting to the school nearly frozen and having to light the pot-bellied stove. Sometimes for a whole day we would sit around the stove in order to keep warm but it seemed the kids were anxious to learn and would write with mittens on if necessary. 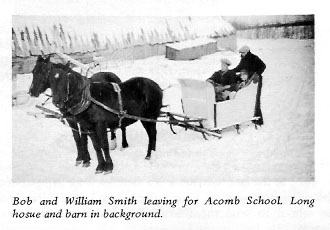 My first venture at teaching was at Acomb School. I was fresh from the city and had fifty-two pupils. About three-quarters were Metis children and many could not speak or understand English. Unbelievably, their ages ranged from six years to twenty years, boys and girls, and grades from one to nine. At noon hour in winter they would set rabbit snares and each day make the rounds of their snares to get their catch, throw them up on top of the porch so the dogs didn't eat them, and carry them home after school. There were no football or softball fields. The school was situated in a small open spot surrounded by bush. In the summer quite often they would snare gophers, make harness out of binder twine, and try to race their gopher teams. There were no worries about buying playground equipment; they invented their own fun and games. They really learned how to organize their free time.

I remember the first year that the school was operated until Christmas. Previously they only had school from about Easter until October. That year we had a Christmas concert and did the kids, in fact everyone, enjoy that. Everyone helped and what a lunch we had, followed by a real old-time dance. We locked up the school and started for home about 6 o'clock next morning. I often think today's kids and parents really have missed something, just the social aspect and the parent teacher communication. And then, of course, there was the odd instance of the other side of the story. Funny to think about now, but decidedly not then; the irate school trustee, a bachelor, who would not sign the contract if the teacher did not promise to stay in the teacherage; the day the inspector came when all the pupils were absent. Memories, memories, a person could keep writing for ever, I think.