From 1910 forward the Force has represented the same high ideals of pioneer days. Patrols by horseback were of necessity modernized to the use of motor vehicles, this before the roads were improved to modern standards, often providing much amusement, and giving considerable advantage to the culprits being pursued by those of whom it is claimed "always got their man." By the time a team was found to pull the car from axle - deep mud or snow drifts, he, the culprit, was "long gone" into the backwoods. As recently as the mid-1960's an R.C.M.P. official car bogged down, on the main road near Frog Lake store, so deeply that mud and water washed over the motor. It was hoisted out by tractor power Onion Lake detachment continued to patrol this district. After the telephone made its appearance here the life of the Onion Lake Law Enforcement Officers became much more hectic, often being called out to settle family squabbles which were usually settled by the time the law arrived on the scene. At other times it provided the means of police protection being more speedily rendered, Onion Lake barracks being some thirty to forty miles distant. The detachment patrolled a very large area in North-Eastern Alberta and North-Western Saskatchewan. Thus, it is difficult to pinpoint their activities to the area covered in "Land of Red and White." In many instances events are common in all districts patrolled. Many convictions stemmed from liquor. Rustling, breaking and entering, traffic and car thefts are continuing problems. Often the speedy and efficient manner with which the Force handled various misdeeds prevented mischief from spreading, to a greater degree, into the vicinity. 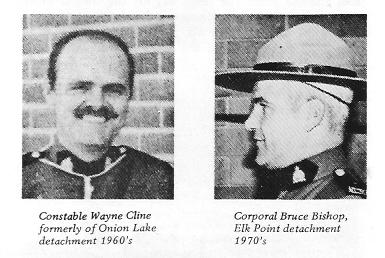 Police reports, submitted for this book, give most coverage to the early years, giving only statistics of the last few decades. We appreciate their delicacy in this. The past need not die; it only needs the healing hand of time. Entanglement with the law can leave deep scars.

Names of claimants and accused have been edited out of these chapters, the names mentioned in specific cases are those of people presumed to be deceased, and there is no intention of causing distress to anyone.

The Patenaude boy mentioned in the pre-1910 reports is reported to have been the son of Louis Patenaude who was first ferryman at Lea Park. He later had a sawmill in the Primrose district. G.T. (Guy) Hunter (1930) was Emma Bowtell's half-brother.

Constable Patrick Burke, who was shot at Cut Knife Hill on May 2, 1885, and died the following day at Battle- ford, was the father of Sergeant William Henry Burke. W.H. Burke served as a Special Constable (Bugler) from April 14, 1891 until May 14th, 1894. He engaged as Constable on May 16, 1894. He was granted leave of absence to serve with the 2nd Battalion, Canadian Mounted Rifles in the South African War during the year 1900. He was promoted to the rank of Corporal on January 1, 1910.

On December 1, 1912 Corporal Burke was promoted to the rank of Sergeant. He investigated murders and attempted murders in various places.

Sgt. Burke remained with the Onion Lake detachment until 1916. He was discharged to pension on October 31, 1917. He died at Onion Lake on September 24, 1926. He was survived by his wife Edith M. Burke.

By 1910 new settlers were coming into the district. They all seemed to be well-to-do, and were breaking land. The crops were very poor that year, averaging only 15 bushels to an acre. A rancher moved with his stock to the Onion Lake district. After he moved, a man was missing some stock. The animal in question had a brand on one ear. The claimant identified the missing animal which the accused then claimed as his property. The branded ear had been cut off. Corporal Burke examined the animal and found the cutting was fresh. The rancher was committed for trial on a charge of cattle stealing but the case was dismissed. A resident of Harlan, near Onion Lake, reported to the Onion Lake detachment that his house had been broken into and a blue serge suit stolen. Investigation by Sergeant Burke revealed that the accused had given the suit to a friend. Accused was arrested and committed to trial on a charge of house-breaking and theft, also on a charge of forgery. He pleaded guilty to both charges and was sentenced to two years hard labour at Prince Albert Penitentiary.

Superintendent West reported that during the fall of 1913 and spring of 1914 there were a considerable number of fires. One was started by a thirteen year old boy who attempted to smoke a gopher out of a hole. The fire raged for days, causing the death of a sixteen-month old child and a great loss of stock, buildings, grain and hay. The fire burned over about 176 square miles, nearly the whole Moosomin Reserve being burned over. The boy was sent to the Industrial School at Portage la Prairie. In the same year fifty cases of accidental and sudden deaths were reported and investigated, also six cases of suicide.

From 1914 through 1915 relief and fuel were issued to persons who were destitute, many settlers receiving assistance in the northern part of this district. The Indian agent was provided with a police escort during the payment of treaty. Prisoners were escorted to Prince Albert jail. Cases of neglected and dependent children were investigated and delinquent children were frequently escorted to Portage la Prairie. The Indians of the district are quiet and orderly; they frequently come to the towns nearest the reserves, selling wood, fence posts, etc. After transacting what business they have, they leave for their home reserve.

Small-pox and measles broke out on the Frog Lake and Onion Lake reserves, however the Indians submitted to what was required of them in respect to the compliance of the Act. Sgt. Burke and Cst. Schermuly enforced the quarantine and before long both diseases were brought under control. A number of cases were tried and disposed of under the Indian Act, the offences being chiefly "drunk" and "supplying intoxicants to Indians." Men were frequently drilled with all arms, and on inspection they are proficient. The annual revolver practise was started in August, but was discontinued in compliance with orders received from Headquarters. There have been no breaches of discipline and the conduct of the men has been good.

On February 14, one James House (Howse) of Frog Lake, laid information before W.J. Hall, Esq., J.P. at Onion Lake, charging that Samuel Trottier had wilfully set fire to the dwelling-house built by him near the Lea Park trail; the accused having been arrested by Cst. Schermuly who had heard of the incident while on patrol. It appears that on February 10, the accused came to the house of the informant, carrying a bag which contained a jar of coal-oil. James House was away from home at the time and found the house burned to the ground upon his return next day. Trottier was apparently under the influence of liquor at the time. Although some witnesses stated he was sober, there was little doubt. He took the jar from the sack and said he was going to kill someone that night. He swung the jar around his head and smashed it on the stove and the house went up in flames. He pleaded guilty and was sentencted to twelve months hard labour at the Provincial Jail at Lethbridge.

The first recorded detachment quarters of this century were those occupied by the Force in 1929, located in a room over the Anglican Mission School. Two team horses were lodged in the school stable. Hay, oats and cord wood were purchased from the Onion Lake Indian Reserve through the Indian Agent, Lang Turner. On December 1st, 1930 the Force began renting land from G.T. Hunter, of Onion Lake, with a two-story frame building located thereon, at $25. a month. They occupied these quarters until April 30, 1956 when new police-owned quarters were occupied on lot S.E. 1/2-5-55-27-W3rd. By 1970, the police-owned quarters had proven inadequate. The Force, therefore, purchased a small parcel of land and constructed a new, one-story, frame and brick building, adjoining the existing detachment site. This new building is used as detachment office, cells and single men's quarters. It was occupied on July 21, 1971. The old building has remained in use as married quarters.