THE HAMLET OF HEINSBURG

Heinsburg, named after the Heins family, originated at its present site with the coming of the railroad in 1928, at which time two elevators were built. The United Grain Grower's first operator was Joe Arnold and the Federal Grain's first operator was Jack McMullen. The hotel was a building built by R. Chartier south of the track near the river and in 1928 moved to the north side of the track on the townsite where it was enlarged and stood until it burned down. Another of the early buildings was a Catholic Church built by Father McLean with the help of his many members. As the members left the district and the church was no longer being used it was moved to the Frog Lake Reservation, where it is presently in use. There never was a Protestant Church built but church services and Sunday School were held in the Community Hall or Legion House, whichever was available. Finally the congregation became so small that services were discontinued, but I think Sunday School is still being conducted at the local school. 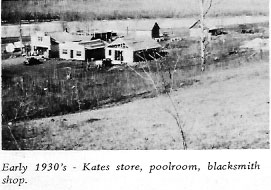 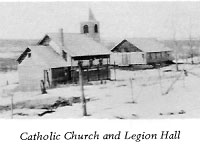 The first store was on the river bank beside the ferry landing and was owned by C.L. Fuller; this was also destroyed by fire in the early years. The first store on the townsite was a building moved in from Frog Lake and remodeled by M. Rahall, who also had a store at Frog Lake, which later was sold to B. Kates. The first store built on the townsite was built by Rudolph Gregor who still owns and operates it, for many years known as the Red & White Store and now as Lucky Dollar Food. The only business in Heinsburg that hasn't changed hands! 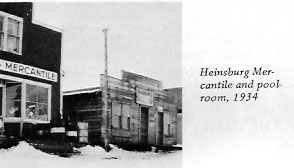 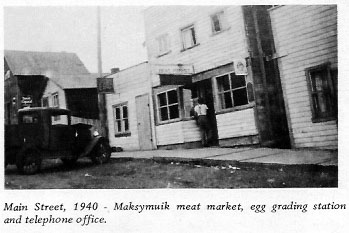 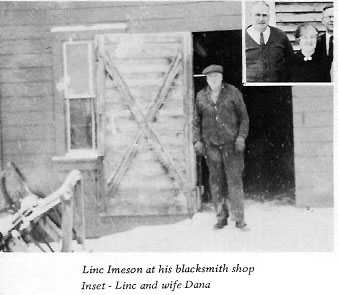 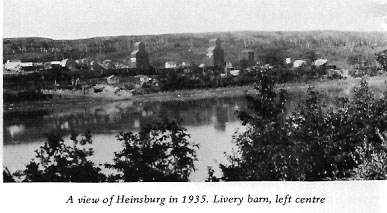 In the beginning there was no school so the children had to attend Martin School in the country, by way of a horsedrawn, covered wagon driven by Tom Womacks. Then for a time they had to walk (very good exercise). Later school was held in the community hall, with the first teacher being Harold White. It was used as one room and later divided and used as two rooms. They also had school in the Legion House for a time so as to have a third room. In the 1940's it was decided to centralize the schools and it was then that the school was moved to its present site by moving school buildings in from the country and using portable classrooms. Now it has been enlarged and improved until it has become a school with grade 12 and other special evening classes.

In the earlier years Heinsburg could boast of having all types of businesses, those being: a poolroom, barber shop, hair dressing shop, lumber yard, several stores, garages, lunch counter, cafe, hotel, radio and electrician's shop, several machine agencies, shoemaker shop, drug store, bakery, theatre-hall, butcher shop, hardware store, several different dance halls, blacksmith shop, two bulk oil sheds, a couple of livery stables, and livestock buying stations. At one time Dr. F.G. Miller had an office in town and made his weekly visits to examine and give aid to his many patients. The first cafe was built by Joe Fong in the early years. It changed hands many times as a cafe, until finally it housed the local post office which was destroyed by fire. 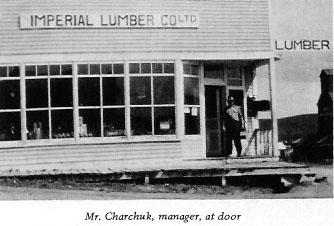 The Drug Store was built and run by W.B. Cameron, survivor of the Frog Lake massacre, and later sold to Ernest Chartier who ran a bakery for awhile. It was then bought and used as a residence by Mrs. Ida Botting and was finally demolished by Chester Botting.

The first shoe repair shop was built of logs by M. Hrechuk. This building also changed hands a number of times, being used as a barber shop, hair dressing shop and dwelling, and finally became the property of R. Gregor. The building now known as the Old Pool Room was built by Adolphus Nolan and was used a short time for dances. It was then sold to Fred Messer who ran a cafe and lived in the same building. Later it was purchased by Fritz Kjenner who ran a poolroom and barber shop and for awhile had the local post office in one corner of the building. Again it changed hands but remained a poolroom.

The first garage was built by Morley Neil who later sold it to Norman Mathison; it finally became the property of Imperial Lumber Co. After that there were other garages; some burned, one still remains. The first post office and telephone office was looked after by Mrs. G.E. Evans. It was in a building which was situated near the present Community hall but on the east side of the street. From there the post office was taken over by Fritz Kjenner and the Telephone by the J. McMullens. Another early builder was Harry McCracken who built and lived in the building that later became known as the Legion House. He was the agent for the Case Machine Co. The building was finally demolished. We also had a Treasury Branch Office looked after by Ralph Crook. 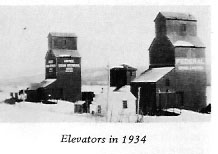 The river was crossed by means of a ferry until 1963 when the bridge was completed. In the spring and fall when the ice was running they used a row boat and then someone got the idea you could cross on the cable. So, a plank was fastened to the pulleys and that was used as a means of crossing until it was improved on by what they called a cage. This was equipped with a motor and made crossing the river in spring and fall quite simple.

The town was served by both freight and passenger trains. The passenger train stayed in Heinsburg six nights a week and the freight train made three stop-overs each week, one being the weekend. All freight and mail was carried on these trains. The livestock was also hauled out on the train as there were no transport trucks running. In the early days coal was hauled in by boxcar because that, and wood, was the only fuel used for fires. The burning of oil and propane came later. The Canadian Utilities, now Alberta Power, brought the power line into town in 1952, at which time everyone had to re-wire their buildings for 110 volt. Until then the town was served by local power.

The Imperial Lumber store was built by Mr. Paulson who, before he had a chance to use it, sold it to the Imperial Lumber Co., who operated it for a number of years before selling it to B. Kates; he in turn sold to M. Nychyporuk. The first C.N.R. station agent was Frank Murphy followed by a number of others. The first C.N.R. section foreman was Julius Prill who had two men to help.

From the very beginning we have always had sports clubs of various kinds. We have always had a skating rink, because in the first place they skated and played hockey on the river. There has also been a curling rink for quite some time now. About the time that Heinsburg was being established a cemetery was begun above the town by the Catholic Church. Situated on land then owned by Gib Evans Sr., it is the final resting place of Gib's wife, Elise, Alex Ebner, and Mrs. Nellie Parenteau.