Surveying for the CPR

SURVEYING FOR THE C.P.R.

Since 1915 I have been in and out of Lloydminster. One of those "outs" was in 1927-28, when I was one of a surveying party working out of Dewberry, Alberta. At that time the line from Lloydminster was partly finished as far as Willingdon. A branch was planned to run north.

We crossed the North Saskatchewan River about six miles upstream from the Lea Park bridge and from there proceeded to the immediate west shore of Frog Lake. While in that area we camped on Harry Bowtell's land across from the old Frog Lake store site. When some of our tents caught fire Emma telegraphed Winnipeg, and in a few days we had new ones. 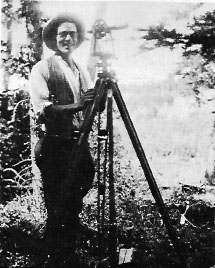 From Frog Lake (the Lake itself) we moved north to cross the Beaver River at the old Beaver Crossing where a Hudson Bay Company store stood. Then it was up the west side of Cold Lake and on north.

A line was intended from Meadow Lake to Fort McMurray and this one from Dewberry would be a branch from it. From Loon Lake the old railroad grade is being used as a road. Back in the late 1920's that grade extended about fifteen miles west of Loon Lake â no rails down, but ties laid. That line was to run to St. Paul.

In our crew Charlie Scobie was axe-man. His brother, Fred, and Joe Lariviere (now a foreman for Husky), were teamsters. Engineer Alexander Livingstone, son of African explorer David Livingstone, was head of our survey party. Tommy Hicks was instrument man. Our topographer, Joe Sascolscie, is a top man with Missouri Pacific in Meridian, Louisiana, U.S.A.

I also worked on the survey of a line running from Lloydminster to Churchill, Manitoba. It was to proceed almost straight east from Prince Albert. We were there eight months, and black flies were a serious problem. Two men had to be flown out, and our survey was discontinued.

Why were none of these lines built? For one thing, it was said to cost a million dollars a mile to put a train on the track in the 1920s. In 1930 the last railroad line was built in Western Canada. Before that the C.P.R. owned trucks and planes, but they were not in service. Then, with the Depression on, these two alternate means of transportation seemed more economical.

At the present time I work at the Co-op parking lot in Lloydminster. My wife is Orece Leveille from the Raft Lake (Clandonald) area. The Ponderosa Ranch headquarters (Queenie Creek) is on her father's homestead. The old log house is still standing, now being used as a shed for bulls.