OFF TO THE SLOPES!

The hall of fame in the ski-jumping realm was not altogether excluded from the sports curriculum of the Braves and Vikings of Norway Valley. The thrills and spills, an annual event on the snow-covered river hills overlooking the majestic Saskatchewan River, which Jack Frost had covered and held spellbound for a month or two, was the arena of these trophy artists as they floated through the air.

One of the noted performers was Ted Thorson, a native of Norway; well digger by summer and skier in the winter. His introduction to the inrun leading to the jump was unique. While he buttoned on his skis he never took his eyes off the take-off. He would straighten up, adjust his cap which never seemed to be put on right, then fish out his snuse box and install a rather over-emphasized helping of Copenhagen. As he re-checked his ski harness, the long- awaited cry from the top came - "O.K." The flag went down and all spectators had their eyes nailed on Ted as he pointed his home-made hickories down the track. The end result was generally a thrill to all the Braves as well as others who had come to see the new-born sport. 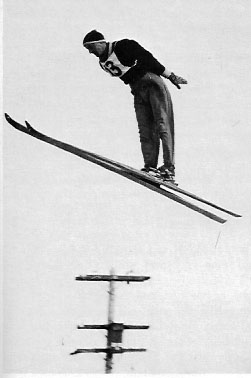 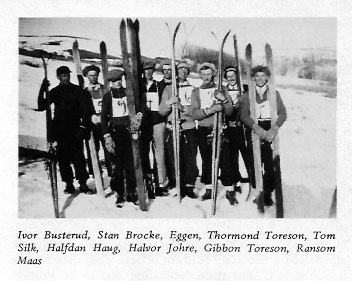 We must not forget Ivor Busterud as a wholesome competitor. We Johre boys did not exactly prove to be adverse to a sojourn into the blue. In fact I outjumped Edmonton on several occasions. Ski jumping did have its drawbacks in the early thirties, since jumping skis could not be bought. Ski boots were available but the necessary ingredients to make the purchase were rather scarce.

Improvisation became an art. I recall in one instance where Ted came up with the idea of felt socks and rubbers which he put to the test. On his virgin flight however, his dream was shattered, as he plowed head first doing the splits. Each ski took off in a different direction and Ted parted company with both. This would not have been so bad except for the fact that the felt socks pulled off his feet and remained intact on the skis. A somewhat ruffled- up performer was left in his stocking feet. To see him scurrying off after his skis in three feet of snow in subzero weather left his spectators in a very strange mood. Ted did not share the same feelings.

There were other rivals to the ski crown, such as Ross Sanders and the immortal Harald Odegaarden. Ross would invariably take a tumble. It seemed he had resigned himself to such, as he would wind up at the bottom of the hill with skis, arms and legs sprawled out in a windmill fashion. He would sit up and view his highly amused spectators as much as to say: "Well, I can't stand up, but I sure have falling down pat." Harald would follow a similar pattern; the only difference was as he came to rest at the bottom of the hill he would break into a high E in the most bilingual terminology that would have put an ardent mule skinner to shame.

The sad part is that the ski tracks of the thirties and forties have vanished. Both the Vikings and the Braves have turned these hills back to the coyotes who leave the only tracks that can be enjoyed. Let us hope that soon these slopes will again be decorated by this human touch.