"Except the Lord build the house, they labor in vain that build it." Psalms 127:1.

Thus it has been with the Pine Grove Bible Camp, nestled in the majestic pines that gave it its name, set back from the east shores of Whitney Lake. Surely the Lord has been in every advancement of this once-so-primitive camp. The vision of a Bible Camp was born in the heart of Mr. Nick Sherstan who, at the time of its beginning, lived thirty miles north of Bonnyville, Alberta, and who now is with the Lord. Mr. Sherstan longed to give the young people of his area something more. All they had known was hard work punctuated only on Sunday by a church service. Thus, the summer of 1943 found a group of about twenty campers at Jackfish (now Manatoken) Lake.

In 1946 Camp was moved to Muriel Lake and in 1947 to Moose Lake. Moving was a simple matter, as only two tents were used for chapel, dining room, cabins and any other activity that may have been added from year to year. A great improvement was added when someone with architectural imagination constructed a three-walled kitchen of slabs for a few of those first years - even had a floor one year! Real luxury not to have dust rising in clouds from the cooks' feet as they labored over hot wood-burning stoves.

1948 was the first year that saw those old brown, patched, and still leaking tents pitched on the shores of Whitney Lake. We found a very cozy spot, or so we thought. It was surrounded by hills except for the trees on the lake side, and should have been well sheltered. However, it was not long before we discovered it was not much more than a pothole. Nevertheless, it was at this site that Whitney Lake Bible Camp, as it was then known, began to really take shape. The Haugland brothers became excited about what could be accomplished in the hearts of children at such camps. They invested time, money, lumber, granaries (for cabins) and much effort to help prepare for them. Other local people also saw the potential and added their hands and pocket books.

It should be mentioned here that by this time a camp fee had been levied on every camper - all the way to $2.00 for a week. (Early camps were free.) This also was a help to expand our facilities, since it certainly didn't take all that to feed a child for a week, considering the donations of canned goods, baking, etc. that were sent in. Nothing else to spend money on! No expensive handcraft or recreational equipment. Afternoons were spent playing games, swimming, hiking, or perhaps with some handwork prepared before camp week by counsellors. To revert, for a moment, to the unavoidable expenses of camp: one summer, 1948, our milk bill was all the way to thirty cents a gallon. Not skim milk either! 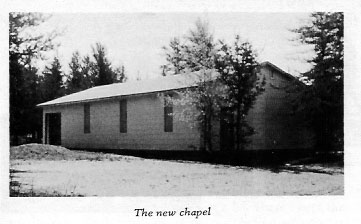 1953 saw noteworthy changes: 1. change of location to the present site. 2. change of administration from interested individuals to an organized camp board. 3. change of name to Pine Grove Bible Camp Association, with the stated purpose of "being custodians of the property â to oversee the use of the property, and to direct the future expansion of this property."

To bring you quickly up-to-date with the physical progress of our camp, we now have cabins to accommodate eighty campers, a dining room-kitchen (in dire need of replacement after some twenty-seven years of service, and having been built of rough dimension and a special brand of "knot-hole" siding in the first place), an old chapel to be immediately transformed into cooks' quarters, and a new chapel, which we began to enjoy in 1975. These facilities are at present being rented by the Canadian Sunday School Mission and the Christian and Missionary Alliance for a total of six weeks during the holiday months.

As for spiritual accomplishments, we cannot know the extent. The Lord knows that. We do know that many children and young people have had their hearts and lives transformed during these few days they spend at camp, and only eternity will tell the complete story. "Hitherto hath the Lord helped us - and He abideth faithful." I Samuel 7:12 and II Timothy 2:13.

NOTE: Miss Gray and Miss Zaccaglini were active in this work from its beginning in 1943 until the spring of 1952, when they left the Lindbergh area to do missionary work in another part of the province. They were, in fact, the directors of each summer's camp. They preserved fruit and vegetables by the hundreds of quarts in order to keep the fee at such a low rate, enabling all who wished to participate in the camping program to do so.