From Joe Laboucane, a promoter of the three stampedes, 1945 - 47 inclusive, we received the following information: Horses used were from the Jack Wolver herd; the cattle belonged to Wilfred Laboucane, Fred Horse and Fred Fiddler. Joe and his brother Wilfred were instrumental in getting corrals erected and other necessary arrangements made at a site on the south-west shore of Clearwater Lake. Open air dances were held in the evening, and during a break various people came out on the floor to do the Red River jig. 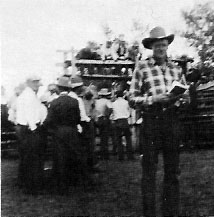 From Beaver Crossing there was Matt Scanie and Steve Amable. The Scanie name is still heard in rodeo circles in the 1970s. From the Hazeldine - Dewberry - Clandonald area we can list Joe Maltais, who also rode at the Calgary Stampede, Frank Needham, Glen Elliott and Clarence Goldsmith. Tulliby Lake was represented by Doug Ward and Bobby Sidener. Apologies are extended to any who participated or helped with the arrangements, but are not mentioned here. 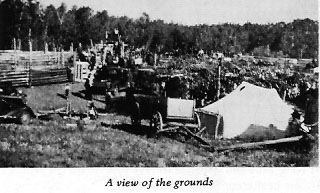 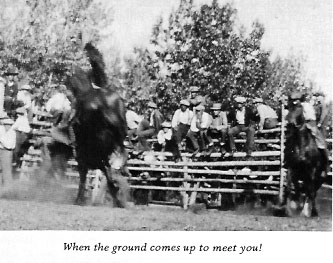