May I cross the Reserve line into "Indian Territory" to pay tribute to a man, small in stature but very big in heart?

Reverend Dicker came to minister to the Frog Lake and Onion Lake native people for the Anglican Church in the early 1960's. His headquarters were in the manse on the Frog Lake Reserve. He followed the Reverend Ray Clennett.

His mode of travel was by a jeep that he owned when he came here and it was almost immediately put into a kind of taxi service for the Frog Lake Indians. There were very few if any cars on the Reserve at that time and it was quite difficult to find anyone in the white settlement who could take time off at a minutes notice to drive the native people. The miles Mr. Dicker and his jeep travelled! Mainly to Elk Point and Onion Lake, but often to more distant places or at times to the local centers for groceries and mail. Despite the time spent on the road he managed to have his services ready for Sunday. 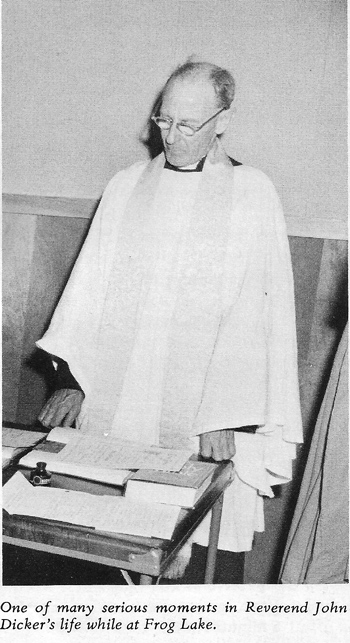 He was a frequent visitor in our home, often dropping in for supper or afternoon tea; sometimes to get help with minor repairs for his jeep. One particular afternoon he came in toting a brown paper bag containing cans of fruit, vegetables and meat. He announced, "This is for supper." I told him he was welcome for supper anytime and that he should not have bothered to buy us groceries but he, being quite independent, countered with, "I can't keep eating your goodies and not give anything in return."

One winter night, the thermometer registered forty-six degrees below zero (F). Sometime about midnight we heard a knock on the door. It was the Reverend Dicker, all bundled up, but minus his glasses. He wanted to phone Dr. Wiegerinck at Elk Point to come and attend an expectant mother. He said his jeep wouldn't start. He walked the two or more miles to use our phone. He had broken his glasses trying to clear the steam from his breath off them without taking his mitt off because he was afraid he couldn't get it back on in the cold. He said there were some young men at the Indian woman's home but they told him it was too cold to hitch up a team and go for help. While he warmed up and drank a cup of hot tea we phoned the doctor who said she would leave immediately.

Our car was not plugged in and no amount of trying would get it to start. We coaxed him to stay the night; nothing doing, he had to get back to the Cold Lake Highway to show the doctor to the Indian woman's home. I said to him, "You know they are taking advantage of you, why do you allow it?" He straightened his shoulders, looked me in the eye and said, "Our Savior allowed people to take advantage of him."

One afternoon he showed us a little black note book and read us some from it. It was a mileage record of trips he made in his jeep: the hour and minute of his leaving and arriving, such as â Left home at five minutes past four, arrived at Kinch's at twelve past four, left Kinch's at fifteen to five, arrived at Elk Point at six o'clock. Left Elk Point at seven-thirty and arrived home at eight forty-five. Every little stop was recorded, hour and minute.

We only saw him discouraged once. He knew he was almost due for retirement as he was not a young man when he came. This time he had just received a reprimand from the diocese. They feared his taxi service was interfering with his clerical duties and it was suggested that he discontinue the taxi service. He looked so forlorn when he told us. "But", he said, "they don't understand the people's need."

One of the highlights of his ministerial life was attending the synod at Prince Albert where Bishop Crump officiated. He expressed much enjoyment at being able to attend this event and showed us pictures of it. He and Bishop Crump did not always see eye to eye on more than one point. One difference of opinion was that the Bishop felt that a man of Reverend Dicker's age should have a town or city parish but the Reverend, being a determined man, preferred field work and greatly enjoyed his work on the reserves. 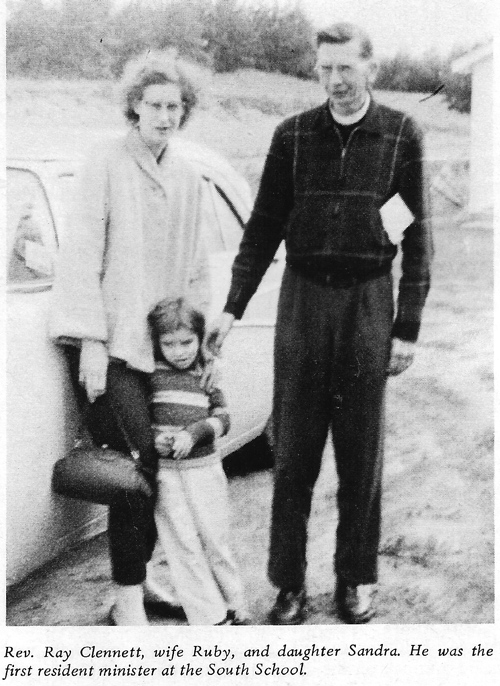 We only heard him mention one relative, a sister in Australia. After he left Frog Lake sometime in the late sixties we never saw him again. Before long, letters were received from him postmarked England, but we never heard of him retiring from his service to God. The vacancy was filled by Reverend A. Lloyd, succeeded by Reverend Chanty of India and currently Reverend Alfred W. Scott.