Treaty and other Problems

Treaties were resented by some. Indians "used" land rather than "owned" it. They believed the white man understood that one could use another's property and draw the profits it produced without wasting its substance. They also believed the land would be used in the same manner as the Hudson Bay Company had done.

The conversion from hunting to farming was difficult. As Bishop Grandin of St. Albert said, the Indian liked to see immediate results of his efforts. The people were used to being subject only to their own will or to tribal rule. What they felt were virtues the white man called faults. An Indian who stole a white man's horse might be held in high esteem by his people, but if caught, hung by the whites. 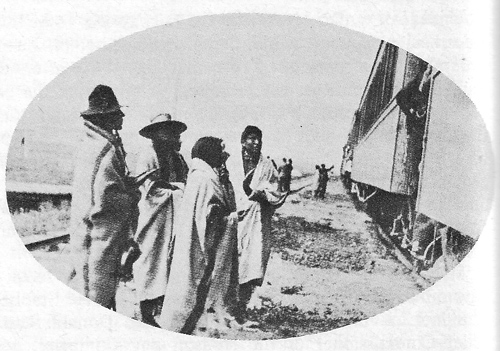 The 1885 population of the Northwest Territories was nearly 26,000 whites, 2,254 half-breeds, and over 20,000 Indians (possibly nearer 25,000). Following a heavy deficit in 1884, government spending was cut and the Indian Department felt the pinch along with others. Clerks who assisted Indian agents and freed them from much of the bookwork were dismissed. Agent Denny of Fort Macleod resigned because he was told to limit his visits to reserves to once a month. Lieutenant-Governor Dewdney could see this policy was a mistake. Even worse was the fact that rations were cut. Vankoughnet, said Indian Agent Rae of North Battleford, had almost caused an uprising by ordering Big Bear to take a reserve within a month or get no rations. Working for rations was reasonable for settled Indians but not those wandering newcomers.

The Northwest Territories had no representation in Parliament until 1886. The North-West Council at Regina, with six official and eight elected members, had pitiful powers. Presentations to Ottawa were shelved until two months after trouble started. Actual rebellion had happened years before in Ontario and Manitoba, and it looked inevitable in the West.

The oldest and largest Metis settlement was at St. Albert near Edmonton, but it seems to have played little part in the trouble. Some Metis from Manitoba had claimed scrip there. Later they sold out and moved to Saskatchewan, where they again applied.

Macdonald felt there was no advantage in giving a nomadic person 160 or 240 acres, especially when he might sell it for fifty dollars and move on. The Metis resented a charge on odd-numbered sections. A standard Metis river lot was ten chains or 220 feet along the river and two miles deep. The area was the same as a quarter section but crossed the lines of the square survey. Appeals, such as one from Batoche in 1882, were unanswered.