After the Indian uprising of 1885 twenty-five years passed before the influx of white settlers began to move into the area that was commonly referred to as "North of the River". Because of the wide-spread publicity that stemmed from the rebellion, Frog Lake was the place to which the pioneers came. There were no districts, only Frog Lake; districts were formed as the need for schools arose. Lea Park was a dot on the map where a river crossing was situated. Mooswa was some thirty miles into the northwest.

Main travel was via C.N.R. from Edmonton to Kitscoty or Vermilion. Some pioneers purchased a team of oxen or horses and wagons to bring their effects from the railroad, some caught rides with other pioneers, some with settlers who had made the trip back to pick up supplies. Some walked, all crossing the river at Lea Park. The man usually came first, picked out his homestead, returned to Vermilion or Edmonton and made application, then brought the family. Later Jack McGowan was authorized as "Land Office Agent" with his home as his office.

Perhaps the person most responsible for directing the pioneers to Frog Lake was Homestead Inspector, Harry Bowtell, who, from his office in Vermilion, sent his land guide, Bob Beckett, and Harry's brothers, Fred and Art, to drive the prospective homesteader around the Frog Lake area, showing him the available land. 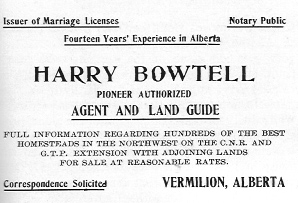