The quarter section of land on which Camp Whitney is located was sold as part of Mr. Art Lander's estate. The estate was handled by William G. Fuller, Q.C., and the Rev. Henry Day of Elk Point, executor. Mr. R.J. Tredger of Elk Point purchased the land and sold it for church purposes to Miss Ha F. Newton of Vilna. Miss Newton held it until January, 1954, when it was purchased by the St. Paul United Presbytery Recreational Association for use as Camp Whitney. This Association was formed in October of 1952 with the following members: Rev. John Wing, Bonnyville, chairman; Mr. William G. Fuller, St. Paul, Secretary; Rev. John Lee, St. Paul; Miss Ea Newton, Vilna; Rev. Charles Vogel, Kitscoty. 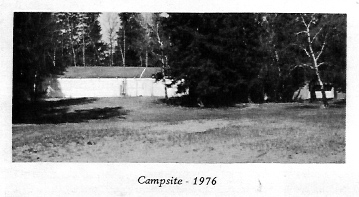 The camp has grown from one ten-day camp in 1953 to eight one-week camps in 1972. Many leaders have come forward from throughout the Presbytery to assist at the camps over the years.

Taken from the St. Paul Journal:

Camp in the evergreens at sparkling, clear Lake Whitney 14 miles from Elk Point.

Camp Whitney is one of the best located and more beautiful camps of the United Church in Alberta.

The above fee structure is designed for a family that would be sending more than one camper to Camp Whitney regardless of the camp chosen.