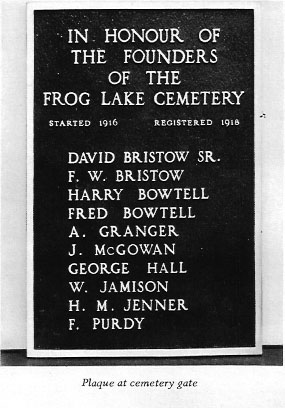 1926, moved by Fred Bowtell, seconded by Wm. Jamison, Frank Bristow was elected secretary at $5.00 per year. He still holds that position. George Kinch has been President for quite a number of years.

May 1961 - Ed. Rushfeldt and John Nichols planted spruce trees on three sides of the cemetery. In 1969 The Frog Lake Cemetery fund was started to help finance the upkeep. In 1971 a new fence was built and painted and more gates put in. Frank Bendixen made a sign over the gate. Frank Bristow made thirty-three cement markers, blocks, with names and dates to show location of all unmarked graves. The annual cemetery clean-up day is the third Wednesday in June. The grass is cut when needed. More graves are covered with a plaque each year which adds to the neat appearance of the cemetery. 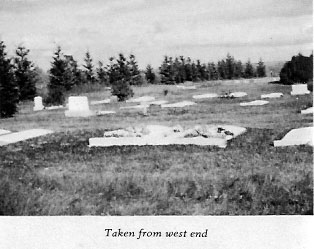