I REMEMBER THE FERRY-MAN'S SHACK

I remember the ferry-man's shack at Heinsburg very well, having stopped there to warm up one winter day, about 1921 or 22. 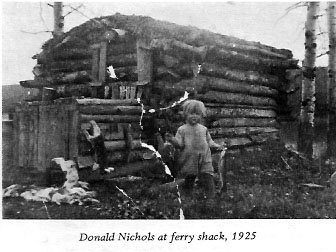 Early that fall my brother Merle, Gus Gamier and I went up to Marcou's saw mill in the Ferguson Flats district and got out logs to be sawed for lumber and shingles. About three weeks before Christmas Gus got word that Marcou would be sawing lumber. We decided to take three teams and bring a good lot home as there was lots of snow and sleighing was good. It was a fine day and a chinook was blowing. The snow was melting on the way up, but the thermometer dropped to 20 degrees below zero that night, and within three days it was down to 56 degrees below.

The men running the mill figured that it was too cold to saw and might last for a couple of weeks. It was cold! Tom Scott wanted to get another load of logs so I went out to help him. It was 40 degrees below and he froze his nose solid on the way back to the mill. Well, it warmed up to thirty-five below, and the sawyer said they probably wouldn't saw till after Christmas. We decided to come home.

In the meantime, Gus got a lame back and could hardly walk. We fixed a seat on the sleigh and put blankets so he could wrap them around himself, with a lantern at his feet to keep warm by. Merle took the lead with his team, Gus next, and I brought up in the rear. It was about thirty-five miles to home. When we got to the ferry Gus was pretty chilly so we stopped, had our lunch and fed the teams. Luten Ketchum and Fage Stone were staying in the shack at the time. There were no other buildings, just wilderness, and they were running a trap line. When we got there Luten was home but Fage was out hunting.

The ferry-man's shack was small, but quite warm when we got there. As Luten had a good fire going it was a welcome place on a cold winter day. We had just finished eating when we heard shots. Of course we all rushed outside to see what was going on. Just about where the Heinsburg hotel stood later, there was a deer going along. Luten and Merle each had a gun and began shooting; they emptied their guns but the deer was still going. I had a rifle, but Merle was using it as his rifle had lost one sight. He was a better shot than I, but when I saw the deer might get away I picked up Merle's gun and began shooting. At the second shot the deer fell. We dressed it out, took half, and left half for Fage and Luten, as it had been Fage who had been shooting first.

I crossed the ferry about a week before the big flood in 1916. The ferry-man didn't want to take us across and said, "If that cable breaks we all go to Battleford." About three days later his wife was running the ferry and the cable did break, but the ferry was run aground after it got to Lea Park.