THE INDISPENSABLE DOCTORS, MILLER AND ROSS

In the winter of 1924 my dad, Louis de Delley, was cutting our yearly wood supply with the help of his nephew Charles Chardon, who was staying with us and working just for his board and tobacco in those days. They were cutting wood half a mile south of home, across Middle Creek, cutting and piling poles, making a road for the team and sleigh. to haul the wood home for sawing. Dad hit a stump with the axe, then a sharp piece flew up and pierced his left eye. He came home covered with blood and in severe pain.

Dr. Ross was sent for, arriving about nine o'clock in the evening, driving a young team which got out of control along Bob Chanler's farm. One rein broke so when the team reached the hill-top near our house he jumped out, taking his little black bag with him. He came in the house and said, "My team is on the way to Frog Lake by now." He went back up the hill for his bag, which was a mess of broken bottles. Charles took his saddle horse and went after the team; they had turned in at E.T. Evans' gate. Mr. Evans, hearing a team come into the yard, went out and recognized the doctor's team. He already had them in the barn when Charles arrived.

Doctor gave Dad sedatives which did not help much. Doctor was called again a week later on a very cold Saturday afternoon. Dr. Ross was afraid meningitis was setting in. We got Dad into the big sleigh with lots of blankets and straw, and a foot-warmer. Charles drove us to Elk Point Hospital, a long cold trip. We had supper and started home.

Dr. Ross was to have filled up our big air-tight heater with wood before leaving our house, but he forgot. He also left our house door wide open in his haste to hook up his team and start on a trip north to Ferguson Flats, then on west. When we arrived home about 11 p.m. everything in the house was frozen solid; house plants, tea kettle, water- pail. I have never entered a house so cold; it was all of 40 degrees F. below zero. 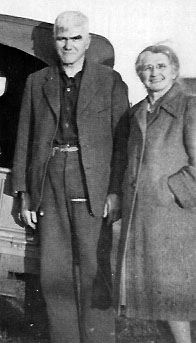 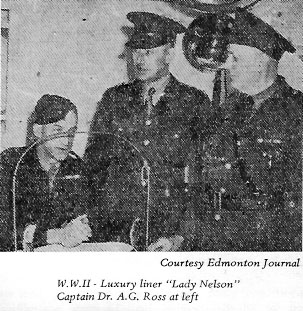 Drs. F.G. Miller and Ross operated on Dad early the next morning, removing the eye. As far as I know this was the first operation of the kind that either doctor had ever performed. The day after the operation Dad got his clothes and went staggering across the street to Keitges' telegraph office, and sent a message to Art Bowtell that we were to come and fetch him home. Just about that time Dr. Ross came to make his morning hospital rounds and knew just where to find him. At the telegraph office! He took him back to bed and kept him there about ten days.

Dad's roommate was Mr. Maxwell from Mooswa. They had beds on the upstairs landing in Dr. Miller's home. Dad's bed was needed after a few days so Dr. Ross took him to his two-roomed house. It had very little furniture, a mattress on the floor and a wash basin on a box.

When Dad returned home he made Dr. Ross a box for medicine with some small compartments, two sets of coat hangers, a wash bench with a drawer in it , and I believe a small table. Dad, having only one eye, misjudged in all his measurements, marks and sawing so I was told to measure and do some sawing as he was spoiling too much lumber. Some of the things were not too straight.

In December 1931 Hilda Keck, about four years old, stepped backwards into a tubful of hot water, which scalded her from shoulders to heels. Her father, George Keck, came for me to go and fetch Dr. Miller. I had to catch my saddle horse and go to the only telephone at Art Bowtell's, which was on a direct line to Dr. Miller. Doc said, "Do I have to come?" I said, "Yes". I wondered at his hesitation in answering that he would come. Then he said that he would be out soon. That was at least 11 a.m. When he finally came by, spraying snow in all directions going north to Keck's, it was about 2 p.m.

At the time of my phoning, Doc's car was in the garage having an oil change and a gas fill-up. He had to hurry the garage attendants to finish the job. When he reached Pete Keitges' area he began having gas line trouble so he had to made the trip this time, taking Hilda and her mother back to Elk Point Hospital.

George Keck brought the two younger children down to me to baby-sit over night and next day until their mother returned on the evening train. Hilda was in hospital for two or three weeks. She had scars for years where the burns were deepest when her clothing was removed.