PRE-1910 HISTORY OF THE N.W.M.P. AT ONION LAKE, SASKATCHEWAN

A detachment was opened at Onion Lake in 1886, following representations for police protection from the Indian agent at that point. The detachment, consisting of one sergeant and five constables, was inspected monthly by an officer from Battleford. The Indian Department supplied a small building for the accomodation of the men. The members erected a suitable stable near by. 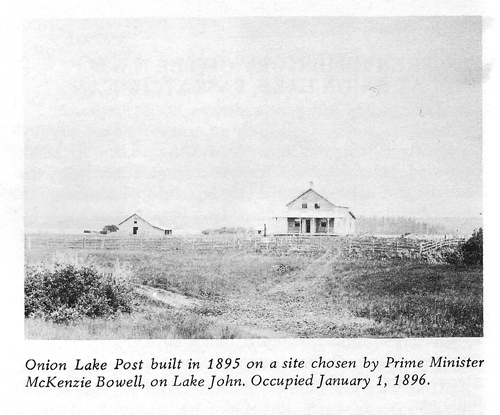 In 1887 the Indian Department needed the building occupied by the Force for its own use. The police, therefore, began renting a building from a Mr. Gibson of Onion Lake, for fifteen dollars a month. The stable was moved to a convenient position immediately adjoining Mr. Gibson's building.

1890; The detachment at Onion Lake sent a weekly patrol to Cold Lake, Saddle Lake, Fort Pitt and the Chippewayan Reserve. The detachment was still occupying quarters rented from Mr. Gibson.

1891: The detachment made regular patrols to Cold Lake, Frog Lake and to the Chippewayan Reserve. Escorts were furnished by police to convey the treaty money from Battleford to Onion Lake.

1892: Escorts continued to be furnished for treaty payments.

The Indian Department supplied the detachment with beef during the summer months. The remainder of the supplies were freighted from Divisional Headquarters, Battleford.

There were about 400 Indians on the Onion Lake Reserve. They did considerable farming and raised nearly enough grain for their own support. During the winter they cut logs and had a grist and saw mill and were able to supply lumber for local demand. They also received Government rations and were paid treaty. There was no evidence of crime and their health was excellent.

Superintendent Howe reported - - These men rendered valuable service during the past fall in the prevention of fires. Constables Parsons and Dixon noticed the start of a prairie fire. By putting it out they saved hundreds of tons of hay from destruction which would have meant ruin for most of the settlers in the district.

At Cold Lake, there are about 145 Indians. They have done well by their catch of fur during the last season; this lake also abounds with fish of the most excellent quality, resembling in appearance and taste the salmon trout which are taken in the northern rivers of New Brunswick. The fish are of immense size.

Editor's Note: These fish were also caught, hauled and sold by the white settlers from the Frog Lake district to supplement their incomes.

There have been numerous prairie fires throughout the district, caused, I fear, in many instances, from Indians hunting; They use the old muzzle-loading gun, and placing old rag or dried grass over the powder, when the gun is discharged the grass or rag becomes ignited and falling upon the dry grass a fire frequently ensues.

There was one case of selling liquor to Indians in the Onion Lake district. A man named McDonald was convicted and fined $100.00 and costs.

On September 1, 1895, the Prime Minister, Sir Mackenzie Bowell, Comptroller White, Commissioner Herchmer and party paid a short visit to Onion Lake on their way to Battleford.

1896: The 510 Indians of Onion Lake Reserve were under the charge of Agent Mann.

The members of the detachment painted the new barracks and dug an excellent well. They also cut and hauled rails to make a pasturage.

1899: The roads in the district were very rough and consequently hard on transport.

Annual report of Superintendent Sanders, 1899 - - Several fires were started in the district and brought under control. One started by some children, who were too young to be prosecuted. The person who caused one by carelessly throwing away a match after lighting his pipe, was sentenced to fourteen days imprisonment.

Indians â The Indians throughout the district are doing as well as might be expected, but from a police point of view, which looks to the maintainance of the community at large, the condition of affairs is not satisfactory. The Indian, if well fed by the government, will do nothing for himself, on the other hand if his rations are cut down to a minimum and an endeaver thus made to force him to do something for his own support, in many cases he will not do it; his nature abhors manual labour, and he exists in a state of semi-starvation. It will take years to eradicate the hereditary instincts of the Indian, and to make him take naturally to earning his living by the sweat of his brow. How far to force him is the difficult problem which the Indian Department has to solve, but do their best. The lot of the majority of the Indians is not a happy one. Such being the case, we may logically conclude that the presence of a sufficient force to keep them in order is necessary.

"Prevention is better than cure" and will be more economical in the long run. I previously reported that the Indians were trapping fish but were not prosecuted. The non-commissioned officer, who investigated this matter, reported that the rations the Indians are receiving at this time is three ounces of bacon and one half pound of flour per day. The ration is increased when needed.

The following is as close an estimate as I can obtain of the number of Indians in the district; Treaty Indians 1,741. Non-treaty 485. (This included the fifty non-treaty Indians at Frog Lake). The mortality among the Indians is great.

In 1900 from the same reportâThe non-treaty Indians of Moose and Frog Lakes had very hard times during last winter, but managed to pull through in some way without being relieved. The scarcity of both fish and game was responsible for this destitution and prospects for the coming winter are not much better. Rabbits which have been almost extinct for the past year or two are again making their appearance, but not in very large numbers.

(Editor's note - Perhaps the following paragraph applied to all non-treaty Indians in the district at that time. The incident occurred at Turtle Lake.)

Sergeant Martin had occasion to again visit Yellow Sky's band on June 24, in connection with a proposed Sun Dance, which he stopped; the Indians deciding to have a Medicine Dance instead. This dance among the Indians appears to be merely a general gathering at which the Medicine Men instruct the others in certain of the so-called arts, they also teach the young men to be good and honest, to respect their neighbor's property and to have no enemy. They were willing to have the police present throughout all these ceremonies. Sergeant Martin asked Yellow Sky why he would not take treaty and he replied, first, he had noticed on the reserves the instructors were too strict and severe. Second, he wanted to be free and independent, to come and go as he pleased without asking permission from anybody. His first answer simply meant he did not want to work or be shown how, and his second is really the only reason for not taking treaty. These people, suffering and undergoing the hardships they do, with an almost hopeless prospect ahead of them, give a slight insight into the Indian character. A generation or two will have passed before he will work like the whiteman. As with wild animals, so with the Indian, in confinement he sickens and dies.

This is clearly shown by the effect imprisonment has on them. His whole nature has to be changed and this has to be done gradually; it will take years and cannot be hurried. These non-treaty Indians who persist in saying, "I am content, let me alone," should be forced to accept the good service from the government that he persists should not be done -- the good services that he denounces a bad service.

1901: Constable Timothy Lucey died at Onion Lake on May 17, after a brief illness.

1902: A fatal shooting occurred at Onion Lake. Two boys named Dufresne and Patenaude had been out shooting to-gether. The sudden discharge of Dufresne's gun wounded Patenaude and he died shortly after. An enquiry was held and death was proved to have been accidental.

1904: The only part of the Battleford district where there was not considerable settlement was in the neighborhood of Onion Lake.

1905: An Indian at Onion Lake was sentenced to one month's hard labour for beating his wife, having pleaded guilty to the charge. When questioned by police after his release, it appeared that he had not beaten his wife at all. He said that his mother-in-law had beaten her daughter and he took the blame because it would have been shameful for his mother-in-law to go to jail.

1908: There was an outbreak of smallpox at Onion Lake. The quarantine was enforced by the men of the division.