I am not much of a writer but I will do the best I can. My father, B.C. Edwards, with my mother and children, Thelma, Lucille and myself (Neal) migrated from Wyoming to Alberta in the spring of 1915. We first stopped at Duvernay, then in the spring of 1916 we moved by wagon to Mooswa. Dad was auctioneer for most of the farm sales throughout the area all the time that he lived there, before moving to Chilliwack, B.C. in 1953.

I have pleasant memories of the area from the Saskatchewan border to St. Paul, and from Islay north to Bonnyville before it had a railroad. I rode all over this part of the country for Bob Braithwaite of Dewberry, who bought cattle in the early days from the homesteaders. They were driven to Islay and shipped to Winnipeg. I started with him when I was quite young in 1922. We crossed many head of cattle on the Heinsburg ferry when that old ferry shack was being used.

There were several railroad surveys made in the late teens and early twenties, but the final one was made about 1924. The railroad had reached St. Paul between 1919 and 1922, at least I know it was extended from St. Paul to Elk Point in 1926, because I worked on it driving a dump wagon for $40. a month. There were three horses hitched to each dump wagon, as it was all horse power. The steel was into Elk Point by Christmas of 1927. In 1927 and '28 the grading was done from Elk Point to Heinsburg. I think that Bill Van Buskirk had the contract for all of it. I worked for him in 1927 just east of Elk Point. In 1928 I worked for C.P. Jackman on more or less pick-up work, from the Muriel Siding to just west of Heinsburg. Of course there were a number of small frezno contractors such as Brooks, Hopgood, Long and Hatchard, and some others who, with Jackman, sub-contracted under Bill Van Buskirk, but the outfits I worked for were considered pretty big outfits in those days of horse-drawn machines.

Bill Van Buskirk's was a three-machine outfit. Each machine (an elevator grader) used fifty-six head of horses, including the machine and wagons. We moved an average of 1200 yards of dirt per day, which was ten hours on the grade, six days a week. Most one-machine outfits had what was called a frezno swing which meant from four to eight freznos to do low grade work on their contract, which all together made quite a crew. Also each frezno used four horses. A one-machine crew of man power consisted of four men to a machine, twelve wagon skinners, one blacksmith with helper, one barn man with helper and one cook with a flunkie, plus some frezno men and roustabouts. Anyway the steel was laid to Heinsburg in the fall of 1928.

I married Dorothy Lorenson in 1936 and operated the Lindbergh ferry until 1940, when we moved to the west coast. We lived in the Washington State until 1973 when I retired and moved south to find warm winters in New Mexico.

Note: One camp was located below Anderson's (on the hill above the Salt Plant) and another on Hank Crook's near Middle Creek Siding. 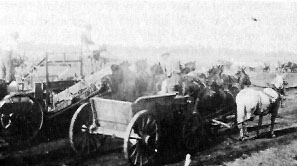 Delivery of a load 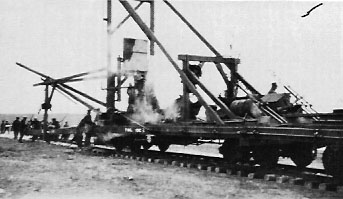 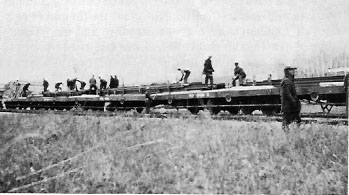