THE TRIALS AND TRIBULATIONS OF A SAWYER

It was in December of 1947 that my father-in-law, Gib Nichols, had his sawmill sitting at the north end of Frog Lake, on Mrs. Sid Scott's homestead. We had got out a few logs and sawed a bit while we waited for the Indians to come and move the mill up to the Elizabeth Colony. They finally came in January, and we loaded the mill onto their sleighs and they pulled them with their teams.

I had a D. John Deere tractor and a bob-sleigh with the husk of the mill loaded on it. We left Frog Lake around noon with three teams, the sleighs and the tractor. We reached Elizabeth Colony about one o'clock in the morning and the temperature was about twenty below (F). We moved into one of the Indian tents to sleep and when we got up next morning the thermometer in the tent read thirty below zero. That day we moved into a little shack that the Indians had put up for us. We set up the mill and started sawing the next day or so.

This was the first time I sawed with Gib; we had Alvin Lumley hired for the winter and we sawed all winter long. Once a week I'd go home with team and sleigh to get grub and fuel. At that time my wife, Stella, and I were staying at Gib's place in the North Home district, south of the river and that is where I went for fuel. A couple of times I had to go to Dewberry to get the fuel because we burned distillate ( a thick heavy fuel that was often called "skunk gas" because it had a strong unpleasant smell and if it was spilled on mitts or clothing could be smelled for days) in the tractor. Later on we got the fuel at Beaver Dam. Anyway it would take a day to get home, a day to get the fuel and grub and a day to get back. I well remember leaving the north end of Frog Lake near the end of December in 1947 and I didn't get home until a day or two in January 1948 so I spent that New Years day on the road.

As the winter wore on the snow got deeper and by spring we had about three feet of snow. On one of my trips on the way back to the mill I had on two barrels of fuel and the grub. The sleigh cut off the trail at Chief Creek, on the Frog Lake Reserve, and sank into the snow. I had to unload the two barrels, pull the sleigh to the top of the hill, unhook the team and go back with a chain and drag the barrels of fuel up to the sleigh. This happened around eleven o'clock at night and by the time I got them loaded again and got to Jack Pine Creek it was about twelve o'clock so I camped there for the night.

The next morning I started out for camp. When I got about a mile from camp that day, my team had played out and couldn't pull the sleigh, so I walked into camp with the team. One of the Indians came out with his team and hauled the load in.

We took a share of the lumber for the sawing and we piled it at the mill site. We were getting short of cash for grub, so we got in touch with Eby Walker at Dewberry, who wanted to buy lumber, so he came with a cat and two sleighs to haul it out. Before Eby came I had gone for fuel and had left two barrels at Chief Creek because it was snowing and blowing and the team was playing out. When Eby came through he picked up the fuel and brought it to camp for us. I was sure glad because I hated the thought of having to go back and get it. We kept on sawing and piling up lumber until we had to move the mill before the frost came out. Eby had hauled out some of our lumber and the Indians had hauled some out as far as Kathan's, but we had no way of moving the lumber that was left. The Indians had hauled their share out from the mill as we sawed. 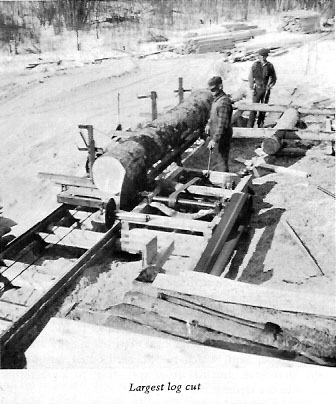 The log in the picture was the biggest log that came in to be sawed. It was about thirty-six inches at the butt.

When we quit sawing we loaded up the mill on the Indians' sleighs and they hauled it out as far as Beaver Dam where we could get at it in the summertime. We had one bob-sleigh behind the tractor which we loaded all our belongings on and we started out from the mill site about six o'clock in the evening. We got about a hundred yards from camp and broke a sleigh runner, so we unloaded and went back to the mill site where we got a piece of birch and, with Gib's know-how, we made a new runner. We got that fixed and on our way again, travelling all night long in a drizzling rain. Along the way we got on a hill' and upset the sleigh; all our belongings spilt into the snow. We proceeded to pick it all up and load it on the sleigh again, and all the while that we were doing this Gib was humming a tune; about all Alvin and I could do was laugh.

Preparing to leave in the spring

Lumber that burned when fire went through

We travelled on, getting stuck here and there, until we reached Kathan's about nine o'clock the next morning. By then we were fairly well dampened down. After eating dry bannock through the night we were welcomed at Kathans with hot-cakes and fried eggs; a meal fit for a king. We stayed there that day and on the next we started for home down the old Cold Lake Trail across the Frog Lake reserve.

I was driving the tractor, Alvin and Gib were sitting on the sleigh behind, and in some spots on the road the snow and water was quite deep. At one place I turned the tractor out of the trail, when the sleigh turned Gib went sailing off and landed at a running crawl down the road on his hands and knees in about a foot of snow and water. Alvin drove the tractor and I sat on the hood to tell him where

the road was. From there on to the river the going was pretty good.

We had to leave the outfit at the ferry shack at Heins- burg because the river was unsafe to cross. We walked half way across on the ice and then rode across the open water in a row boat. We were met on the other side by George Martin, Eby Walker's hired man, and went to Eby's by car. From Ebys's we walked to Gib's place. The water on the road was pretty deep in places, and my feet were already wet, so I carried Gib across the puddles on my back so he wouldn't get his feet wet.

Before this, when we were still at the mill site, Gib had said to me that, "Every day we saw up here we're getting poorer." However we still had 15,000 feet of lumber up there. The most unfortunate part was that after we left that spring a fire went through and burned up all our lumber. This made Gib's saying more real than we had ever dreamed. Even with all that happened I can truthfully say that this was one of the good times of my life. I sawed with Gib a couple of times afterward at Fishing Lake.

Through that first experience in working with a sawmill I got real interested and built a mill of my own which took me two years to complete with Gib's help. Since then, with my own mill, I have done, and am still doing, custom sawing. I have sawed logs for many of the people around Frog Lake district, including the reserve and the Fishing Lake Colony.