In 1942-43 Primula S.D. No. 2954 was part of the Two Hills School Division No. 21. The register for that term shows that Alice Hannochko was the teacher, with an enrollment of 27 students in Grades I through VIII. Only two months were recorded, July and August, 21 and 19 days respectively. The list of pupils included four Walters, three Eddies, and two each of Mike, Helen, Mary, John and Evelyn. Seems likely that the teacher got more than a single answer on many occasions. 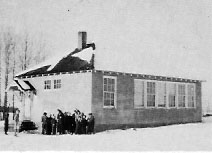 A form in the front of the register was to be filled in within one week of school opening in the fall. Three questions asked there give us an idea of situations teachers faced in those years. How much is your salary in arrears? How much salary is owing you from other districts? (Specify districts and amounts). Are there any special or unusual features in the organization of your school?

William Grasiuk began teaching at Primula in the fall of 1943, during World War II when school did not begin until October. That month there were 14 school days for the 29 pupils. By April 1944 the enrollment was up to 33 despite the departure of three Farina children. At Easter the only time off was Good Friday and Easter Monday. School let out on July 14.