Frog Lake, June 8th, 1925â Over three hundred people met here today to witness the unveiling of the tablet erected to the men who were killed in the Frog Lake massacre of April 2nd, 1885. Unfortunately, because of incorrect information given to Judge Howay, who was coming from Ottawa to officiate, the ceremony did not take place today, but was postponed until Tuesday. Mr. A.E. Peterson, who was in charge of arrangements, was not advised until late in the afternoon that the officials were not coming. It was then arranged that W.B. Cameron and others present should give addresses.

Mr. Cameron was the sole white male survivor and everybody was anxious to hear him. The gathering then moved over to the cairn upon which the tablet is placed, and Harry Bowtell was asked to act as chairman. Mr. Peterson made regrets that Judge Howay had not been able to reach Frog Lake. He blamed the incorrect information given from Kitscoty for it. He said Judge Howay would arrive tomorrow and the actual unveiling would take place then. 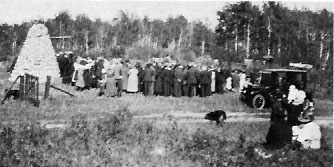 Mr. Bowtell then called on J.W.G. Morrison of Vermilion to address the gathering. Mr. Morrison's short address greatly impressed the people present. He contrasted the present days of peace and plenty with the strenuous days of 1885, and drew from the erection of the cairn, a lesson to all of us, in that those men had laid down their lives for Canada, as in the great war our boys had done in France. Time would soon efface the remains of that tragic event but this cairn would live on to mark the resting place of those who were killed forty years ago by an excited body of Indians, driven into a frenzy under the delusion that this was the only way their grievances could be remedied.

Following this, Mr. Cameron spoke and detailed all the events leading up to and including the shooting and his escape from the scene of the massacre. He showed them the original order which he was filling when the first shot was fired and Quinn, the Indian Agent, was killed. Big Bear was chief of the Cree tribe; he said he saw him running up to his men and telling them not to shoot. The men were in a frenzy and would not listen. Mr. Cameron described the buildings and told where they were located, how the Indians acted when they went to the church, and where they killed the two priests. The buildings were close together and everything, he said, happened within a few minutes.

When he concluded his address, Mr. Cameron went over the site and pointed out where the buildings were situated and where the men were killed. The historic site was then a plain - now it is fast growing into brush and timber. The cairn is erected in the little cemetery where the remains of those massacred are interred.

A pleasing feature of the afternoon was the singing of hymns by the classes of the Indian school, of which Mr. Peterson is instructor.

Note: It was a day of disappointment to many of the three hundred people who came to witness the ceremony on June 8, 1925. Some had traveled long distances to attend; the school children, Indian and white, had been granted a holiday but did not see the actual unveiling, nor hear the official guest speakers. It was quite disconcerting to Judge Howay and other official guests, upon their arrival the next day, to be greeted by a smaller than expected audience. 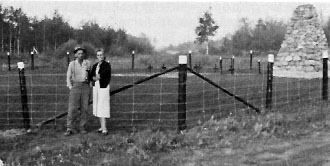