The following article was taken from a 1954 edition of the Edmonton Journal. --

The Old Frog Lake mill wheel, now resting in the Vermilion Town Park, is one of the few relics of the frontier village of Frog Lake, which fell before the sullen Indians on April 2, 1885, nearly seventy years ago. Early that morning the Indians shot down two priests and all but one of the other male white residents and burned the houses, the church and the mill. Then took the only two white women into captivity.

The wheel was purchased in Toronto in the fall of 1884. It was brought west by John C. Gowanlock and his bride. They came by train to Swift Current, Saskatchewan which was the nearest point on the railway by which to reach Battleford. The young couple made the 195 miles from Swift Current to Battleford by team and buckboard with the heavy mill wheel in five days; four more days were required to reach Frog Lake, where Gowanlock, at the request of the Department of Indian Affairs, was building his mill. 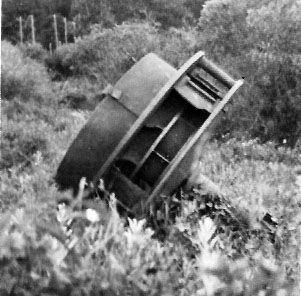 On the banks of Frog Creek

Construction of the flour mill went on all winter and by March 17, 1885 the machinery was all installed, but the mill was not put into operation because, on April 2nd, the Frog Lake massacre took place. The mill was burned and the wheel lay in the bottom of Frog Creek until 1952.

Somehow it escaped the drives for scrap iron during the recent war, for it would yield much metal, being a massive affair and weighing many hundreds of pounds. Two years ago a junk man spotted it and tried to haul it away, but his truck was not big enough to drag that wheel out of the creek bed. To prevent it meeting such a fate, men of the Highways Department winched it out of the creek'and took it to their shop in St. Paul. Councillor Ken Urquhart, of Vermilion, heard about it and had it brought to Vermilion and set up in the Vermilion Town Park.

Ken Urquhart has passed away but Mrs. Lottie Hodgins, the former Mrs. Ken Urquhart, explains that Melvin Hill, a former Mayor and fire chief;  Elmore Stewart, manager of Craig's store until his death; and Ken Urquhart, all of Vermilion, and all interested in Canadian history, were instrumental in bringing the mill wheel to Vermilion.

Inscribed on the plaque are these words - "Frog Lake Massacre -This mill wheel is the only relic recovered from the actual site of the Indian uprising thirty-five miles north-east of here, in which nine men were massacred by the Indians, April 2, 1885. This plaque was placed here by business friends of Melvin Hill, in appreciation of his service to the community."

There is a Frog Lake Chapter of the I.O.D.E. at Vermilion. When asked why that name was chosen the answer was that a chapter's name is to be connected with some historical event. The site of the mill wheel is their project. A flag pole has been erected and flowers are cared for by the members.

As a member of the Frog Lake community I am taking the liberty of expressing a few remarks on behalf of my neighbors: We are chagrinned that Vermilion got possession of the historic mill wheel and feel that its proper place is near the cairn at the massacre site. But - I, too, feel my share of responsibility for the indifference toward our national history, that we who live here, allowed this to happen. We are grateful that someone had the foresight to see its historical value and salvaged it from being ground into scrap metal. It is locally believed that the mill stone is still in the creek but so far efforts to find it have failed.

We hope that as many of our readers who can possibly do so, will visit the Vermilion Town Park to see this relic of the Frog Lake Massacre. We extend our thanks to the Frog Lake Chapter of the I.O.D.E.