Until 1929 community doings were held upstairs in an old two-storied granary belonging to Harry Bowtell, situated 1/4 mile west of the present site of Hamdon's store. This was too small and unsafe and on November 18th, 1929, a small group of men met at the home of Mr. and Mrs. Harry McDonald, Frog Lake postmaster at that time, for the purpose of organizing a community club. They chose Johnny Gregor as president, Harry G. Jenner, vice-president and Trygve Kjenner, secretary-treasurer. They went to work to interest more people in a community hall and in December 1929 decided to build.

To raise money they put on two plays, "No Account David" and "Deacon Dubbs". These were shown at Heins- burg in the loft of Jack McMullen's livery stable, at Dewberry, Onion Lake and Spring Park Hall. The casts were; Trygve Kjenner, Eileen Bowtell, Maggie Jamison, Fritz Kjenner, Anna Kraft, John Gregor, Mrs. Jenner Sr., Jean Granger and Eddie Moen. At Dewberry "Porky" Eddie Moen disappeared and when found was more than a little intoxicated and was fed coffee grounds to sober him up so the play could go on. Material was purchased and hauled from Lindbergh and building got under way. 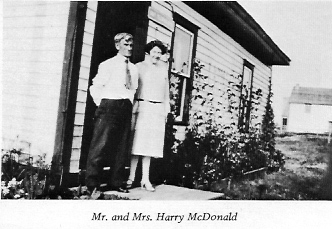 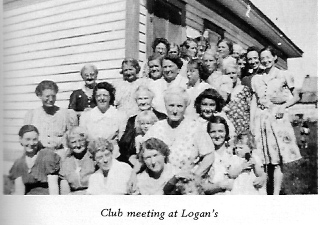 At the first annual meeting Billy Jamison and young Harry Jenner were nominated for president. Each received eight votes, so the tie was settled by the flip of a coin and Billy became president: he held that position till 1941. In 1934 the hall executive was Pres. Billy Jamison, Harry Jenner Vice-Pres. and George Kinch, Sec-Treas. April 19, 1934 a group of ladies met at the home of Mrs. David Bristow Sr. to form a ladies' Frog Lake Community Club to work with the hall committee. Mrs. Alex Peterson was elected President and Mrs. Frank Bristow became Secretary.

The opening of the new hall was celebrated on April 27, 1934 with a free dance. Music was donated by Gerald Lawrence's orchestra consisting of Gerald, Harry Jenner and, I believe, George Parsons. Mrs. Sillem was hired as caretaker at fifty cents per meeting or dance. She didn't like cleaning chewing gum off the floor so she put up a sign on a cardboard, "Deposit Your Chewing Gum Here". For the first dance the committee asked three ladies to make the sandwiches, which they did in the afternoon, all the bread and bologna had to be sliced by hand. Mrs. Sillem later remarked, "Didn't those men make awful sandwiches?" In 1934 a three piece orchestra would charge $6.00 and admission at the door was ladies with cake free.

The ladies club met once a month; they got busy trying to raise some money and sent for remnants, also received donations from Eatons and Simpsons. It was all made into useful articles for bazaars and quilt blocks. When ready to be put together, quilt frames were set up in a house big enough to accomodate it. The proceeds of these were turned over to the hall committee to help pay for the hall. There was also a picnic every summer with lunch booth, sale of work and raffle. Then in the fall chicken suppers with food donated by the members. Church services were held in the hall from about 1940 till they got their own church. In the war years the ladies knitted socks and mitts and sent them to the soldiers overseas. Also good used clothing or a few new things were sent to the needy in Britain. 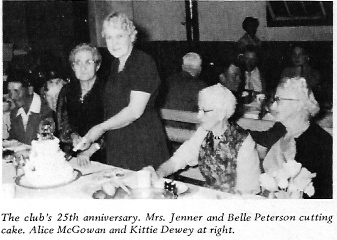 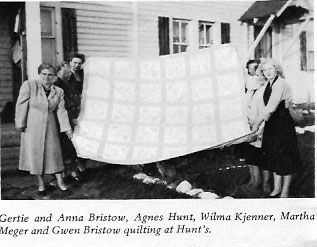 The hall wasn't used much during those years, because of the lack of young people, but in 1948-50, after the war, the clubs and committee reorganized. George Kinch was elected president, a position he still holds; Mrs. Gwen Bristow was secretary-treasurer for the following twenty years. Within that time they decided to add finishing touches to the hall, including a hardwood floor. Amateur hours, dances and a play, "Hobgoblin House," were put on. This play, directed by Mr. 0. Hunt, proved very successful. The cast included: Mrs. Hunt, Jim Boyd, Colleen Hunt, Babe Sharkey, Marion Bowtell, Elmer Bristow, Mr. and Mrs. G. Logan, Annie Bristow, George Kinch, Mrs. Thelma Sharkey, Donald Kjenner and Doris Bristow. It was shown at Frog Lake, Heinsburg, 'Lindbergh, Dewberry and Marwayne. 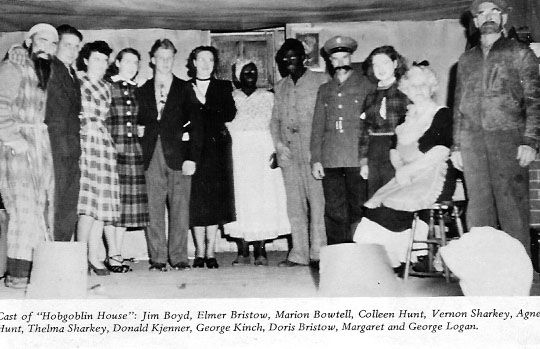 On the hall's twenty-fifth anniversary in 1959, a reunion was held for the former members and others, with a big dinner and dance. This poem was written for the occasion by Jean Kinch.

When fond recollections present them to view,

And e'en this old hall gives you memories, too.

The times when the music asked but six dollars

And you charged only thirty-five cents at the door.

All the lunch you donated, and old Mrs. Sillem

Charged just fifty-cents to scrub all the floor.

The stage and the basement took both work and planning

Deep in your hip pocket went your hand for its aid,

The paint and the floor were very expensive

You worked and donated until it was paid.

A more recent achievement and one to be proud of

At last we have turned on the bright 'lectric light,

But don't rest on your laurels, there's lots that needs doing

The community spirit you are showing is right.

It's been used as a church, elections were held there

Chicken suppers, wedding dances, there have been quite a few,

May the old and the new still build to its memories

As each generation adds something that's new.

In later years by bake sales, rummage sales, bingos, etc, and Government grants we have been able to improve the hall. It has been lined inside and out, a propane furnace installed and this year, after forty years, a new roof was put on and shingled by voluntary labour. The club is still active and is sponsoring this book. Mrs. Anna Bristow is currently Vice-President and Mrs. Annie George is Secretary- Treasurer.