Late in August 1917, I arrived at Kitscoty at 2 a.m. on the C.N.R. Next morning a car and driver took me as far north as the North Saskatchewan River. A kind young matron fed me. A team and driver brought me to my Uncle Dave and Aunt Annie Bristow's farm. The school was on part of their property.

What I remember most was the kindness of everyone. It was a beautiful fall; warm days and cool nights until December. The children were well behaved and eager to learn what I knew. Some of them walked four miles to school. When we planned a Christmas party and program the parents co-operated, helped to decorate the Christmas tree and made the party a success. Christmas Day was fifty degrees below zero, beautiful sunshine sparkled on the snow. New Year's Day there was a chinook wind and it was warm enough to throw snowballs. 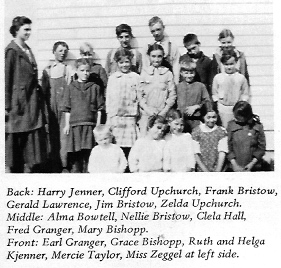 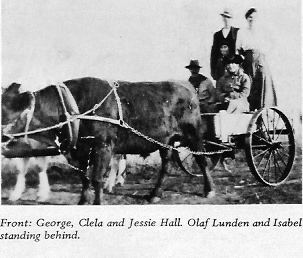 I learned to ride with a western saddle and to dance the polka during the four months I taught at Frog Lake. I went to Calgary to Normal School and taught on a permit. In the picture I recognize darling Nellie, Alma Bowtell, Myrtle McGowan and Mercie Taylor who now lives in West Seattle next to her mother, Bessie, who was secretary of the school board. I think the two little girls in front are Kjenner's. 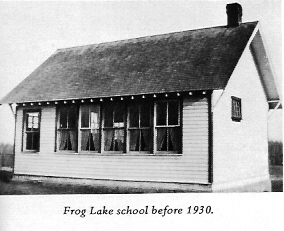