We lived in little one-room shacks, two or three-room houses, the basement of a school, and even in a tent for a month. Teachers lived in whatever accommodation was provided by the school board which hired them. If you were a family of six (we were â Dad, Mom, Dan, Bob, Gwen and Bill), you just crowded in, furniture and all. School teachers' lives were a far cry from their counterparts today. The country schoolhouses were invariably cold and draughty; during the winter ink bottles froze every night and had to be thawed out every morning by the wood heater, which cooked you on the close side, while freezing you on the other. Usually all grades were taught in one room, with anywhere from seven to forty pupils. Sometimes Dad had to do the janitor work, too. In the 1930's the yearly salary was less than the monthly one today.

In 1932 we came to the Martin District. Mr. George Dewey, secretary of the local school board, said they had received over ninety applications from teachers that summer. During the winter Dad and the older boys made a skating rink between the teacherage and the school. Every recess and noon the pupils skated and played hockey. While we lived in the Martin teacherage, there was an exodus of farmers from the south, moving north. Many families used the school grounds as an overnight stopping place. They were welcome to sleep in the school as long as they were out before school time the next morning. Some of the families which stopped were Sharps, Lingrells, Parsons, Craigs, and many more whose names I don't recall.

Elizabeth starting out for school 1946 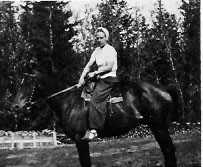 Christmas concerts were one of Dad's specialties; of course Mom always helped with costumes, props and rehearsing. I remember people coming for miles to see a concert. When Dad was teaching at Middle Creek, he sent one of the neighbors down home to bring Mom and us children to the concert. On the way the car quit and refused to go. The driver went into Fred Bowtell's and borrowed a team of mules, which he hitched to the car, and away we went. We arrived a little late, but enjoyed ourselves immensely.

After teaching at Martin school, Dad taught at Middle Creek, Fern Chapel, Acomb, Lake Whitney, Heinsburg, Fishing Lake, and in later years for the Northland School Division at various places, such as Sweetgrass Landing, Anzac, Fort McKay, and Cadotte Lake. While living on the farm Mom taught at Acomb, Martin and Heinsburg. Billy went with Mom to Acomb; they stayed in the teacherage during the week, coming home for the weekends. One week Mom forgot to take her hairbrush and comb. She had to get up half an hour earlier that week because it took her so long to comb her hair with a table fork. Mom was teaching in Heinsburg when she died on May 5,1954.

In the fall of 1943 I came to the Frog Lake School; this was my first school. I lived at home with the folks, since Edward was in the Army. I used to drive the car when the roads were passable, which wasn't very often. Usually I rode horseback, four or five miles, I think it was. During the cold weather I drove a team with the cutter. Sometimes I took Mom to school on my way. She was teaching at Martin at that time. A lot of the pupils used to ride horse back to school â Hunts, Maxwells, Bristows, and Peggy Ann Borger sometimes rode a mule. Dave Thomsons and Trig Kjenner used to bring their children to school. There were some that walked to school â Younghans and Gregors. I hope I haven't forgotten anyone. 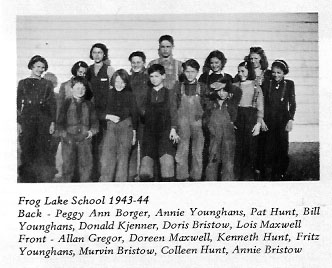 Later I taught in Lindbergh and at Fern Chapel. In 1946, when Edward was discharged from the Army, we started farming in the Ferguson Flats district, where we still are today. We have five children: Charles, Ellen, Amy Ann, Elaine and Brenda. Billy became a teacher, and his first school was Greenvale. The next year he taught at Middle Creek, then he went to Heinsburg. Mom and Marjorie Rushfeldt were the other teachers that year. Bill decided teaching wasn't for him. He went to California to continue his education and became a Medical Doctor. Now he lives and carries on his medical practice in a suburb of Los Angeles. Bill, his wife Darlene, and their three children, Mark, Laura, and Michelle, usually fly up every summer to visit us.