The River and The Fur Trade 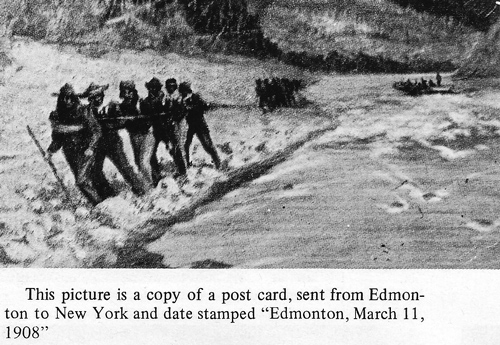 Caption on back of card "Warping Fur Barges Upstream"

The barges are tied together and tow-lines passed to the shore. Gangs of Indians in harness take the place of mules and horses on a tow-path. The work is arduous and makes heavy calls upon the hardiest man."

Some of us still living at Frog Lake can recall an old Indian who claimed that he was about four years old at the time of the Indian uprising. He said he had a faint memory of the shooting and people rushing around shouting. We called him Joe Bum and for many years we never knew that his name was Joe Delver. His home was on the Frog Lake Reservation.

This is the story that Joe told: When he was about fifteen years old he was leader of a gang of Indians who hauled supply barges upstream from Battleford to the mouth of Frog Creek. He described the way they worked and it was similar to the way they are fastened together in the picture.

Often on the trips they waded waist deep in the water. Sometimes it was late fall and ice skimmed the river. After they reached the mouth of the creek, all the Indians were given a cup of rum to keep them from getting sick from being wet so much.

They then carried the hundred pound sacks of flour on their backs up the steep hill where they were picked up by other modes of transportation. Boxes containing pails of lard, syrup, hardware and other supplies were also carted up the hill by the Indian gang. The supplies were taken to the Agencies and trading posts at Frog Lake and on to other points north.