The Heinsburg 4-H Beef Club was organized in the fall of 1963 with Eldred Lowe, U.G.G. agent, as leader; Floyd Bendixen and Eric Horton as assistants. In 1965 Eldred was transferred to Manville, so Floyd took over leadership, as- sited by Donald Kjenner and Roy Bristow. At that time a member had to be twelve years old by Achievement Day, but now the minimum age is ten. Floyd gave up the leadership in 1969 and Donald took over the position, which he still holds in this 1976-77 term. Other assistant leaders: Donald Buksa, Donald Nichols, Aslak (Alec) Glambeck, Lanni Bristow and Vernon Gunderson.

Each year in the early spring members set out on a tour to view each other's calves. Trips have been taken to the Ice Capades, and the Fort Saskatchewan fertilizer plant, but the favorite has been the Edmonton Rodeo in late March.

Achievement days, at the end of May or early June, were held in Heinsburg until 1972, and weighing-in was done at the elevator. Since 1973 the achievement day has been held at Martin Clubhouse. Weigh-in is done on Harold Franks' scale. Each year a woven wire fence is temporarily erected in the clubhouse yard to keep spectators and calves better separated. For quite a number of years a banquet was held after the achievement day and trophies were presented. Invitations had previously been extended to two couples from the Dewberry Club, which invited two couples from our club to their banquet. Catering was done by the Heinsburg Community Club. A number of times in these later years we have eaten outdoors, inviting all spectators present to join us in enjoying food supplied by the members' mothers. Trophies were presented on the spot. Each year the weight of one member's calf is kept secret. Those attending the achievement day have an opportunity to guess the weight in multiples of five, at a dime a guess. The prize is a box of chocolates.

The Inter-Club Show and Sale is usually held the first week of June, with St. Brides, St. Lina, Elk Point and St. Paul also participating. In 1972 the sale was held for the last time at the St. Paul Auction Mart. Since then it has been held in the Polaris Arena in St. Paul. Buyer support has been good, with the average prices often above those of other 4-H sales.

For several years the Heinsburg members won the Best All-Around Club and the Pen of Five awards. We have had our share of other awards, too, including those for Grand and Reserve Champions.

From a financial standpoint it does matter how a calf rates, but it matters little whether he's a champion or at the end of the line when the sadness of parting makes it hard to leave him behind. 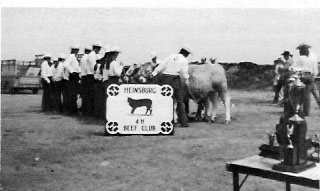 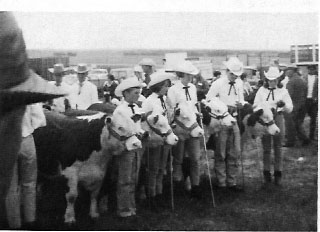