THE RAWLEIGH MAN IS HERE!

as told by J.J. Theroux

I was born in the U.S.A. in 1891. In 1909 the family and I came to Western Canada and settled at Jarrow, between Viking and Wainwright.

I left the Jarrow country in 1925 to come to St. Paul, crossing the North Saskatchewan River at Duvernay. I had to help put the ferry in. The ferryman's name was Theroux, too, but he was not a relative of mine. My new occupation was that of Rawleigh dealer. I drove a team of buckskins, covering about 6,000 miles a year. I would leave my St. Paul home base three times a year, making a circuit throughout the countryside, as far north and east as Cold Lake, south to the Heinsburg area, and back to St. Paul for restocking. I was not allowed to sell on the Reserves or in- the towns. Extracts were kept under lock and key. Getting lost was no worry â it simply meant meeting new potential customers. 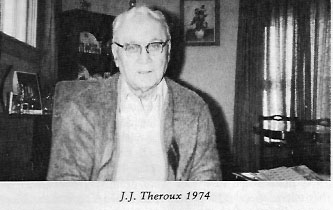 My greatest opposition was from Watkins dealers. Once I loaded up at St. Paul and headed straight for Cold Lake, a two-day trip. As I worked my way back I arrived at the home of a man at Owlseye. It was 11:45 a.m., so he said to unhitch and stop for dinner. He was a former Watkins dealer who admitted he'd been put out of business by a Rawleigh man. He hadn't persisted in his selling, but went on to the next place, with possibly only a fifty-cent order. I sat until 2:00 p.m. and left with an order worth $14.00. My host said, "I won't charge for the dinner â you're too smart."

I carried good products and backed them up. I would never have thought of lying to my customers. Rawleigh's Healing Salve was a good seller, and I still send to a dealer in Edmonton for it. Their red liniment sold well, too.

Once when I was in the Lindbergh area I came, late in the day, to the home of a widow and her son. She hesitated to let me stay over, saying, "I don't like to keep strangers." Finally she said, "Well, alright, there's a couch in the back." They had long-straw greenfeed bales, and I fed some to my team before retiring. Later, when her son came home, he gave them some more. The result was that one of my buckskins was sick with colic, so I decided to head for St. Paul by the shortest route. The next morning the horse died.

Clothing salesmen were going through the country, so I decided to try that line. I purchased a briefcase and got samples from Montreal. Measurements presented no problem, and in 1926 or '27 I had the highest sales in men's suits for that year. At one time I also sold Wear-Ever Aluminum. I found those sales were best before Christmas.

When I was selling for Rawleigh I got my supplies through the mail. It took ten days for my order to come back. I had a small place on Main Street in St. Paul where I kept my stock, and I paid a girl $.50 a day to sell items from there. Other dealers kept their stock at their homes. The town secretary gave me a permit to sell in St. Paul. When I finally quit the business there was still some money out on the books.

I also did some ferry inspection, which had to be done three or four times a year. Once when I was replacing the second engineer I was inspecting ferry timbers at Heinsburg. That day I heard the cries of a young St. Edouard man who had gone in swimming after eating, and ultimately drowned.

At present I am retired and still living in St. Paul. I know if I was to go out selling again it would be hard, and opposition would come from many sources. In those years (192528) I met countless people, and the memories of my experiences are many and varied.