Life at the Mission

The story I am about to tell is somewhat ancient as you will see as it continues.

I was born at Onion Lake Saskatchewan in 1897 a mile east of the village. My mother Rosalie died when I was nine months old and so the mission cared for me until I was eighteen.

It was here at St. Barnabas Anglican Mission I received my education, which consisted of the three R's. And, like other schools of that time, it had its restrictions. The grounds were well equipped, perhaps not as modern as it is at the present day, but it did answer the purpose in a crude sort of way.

The mission was run by the Rev. J.R. Matheson and his wife Dr. Elizabeth Matheson. Although run mainly for the Indian children Rev. Matheson didn't stop there. Instead he took them all in regardless of race or creed.

Many of the children came from the outlying reserves of Saddle Lake, Long Lake, Frog Lake and of course, Onion Lake. The Metis and white children outnumbered them by far. However, most of them were there for one main purpose and that was to learn the English language, some of whom found it most difficult.

Each one of us had our daily duties to perform and for me it was practical nursing at the mission hospital which I learned and did have my share. 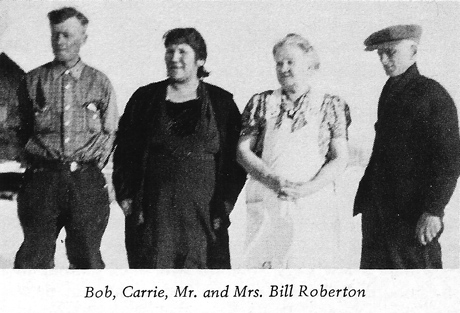 The hospital was personally owned by Dr. Matheson and operated by herself with the help of one or two nurses from Winnipeg or elsewhere. The white patients came to her from near and far for it was the only hospital and she was the only doctor for miles around. Her calls to the outlying reserves and farming districts were made by team and wagon, horse and toboggan or on horse back (side-saddle).

Rev. Matheson passed away after a lengthy illness after twenty-five years of service. He was favourably known for his hospitality and was always willing to give a helping hand.

It was a few years before Mr. Matheson's death that the Rev. Edward Ahenkew came to the mission and took over his (Rev. Matheson's) duties. He later went on to become Canon Ahenakew and then left Onion Lake for other fields.

How we loved our Sunday afternoon walks up the hills and down the ravines. I can still see the wooded trail that led to the old mill stream. That mill has long since passed out of existence and was at one time owned by the Indian Department and operated by the Indians themselves. They used the mill stones for grinding grain and the creek furnished power for the sawmill. We children always made this our goal on a Saturday afternoon although against strict regulations. Then came vacation time! No more school bells, books or slates. The children with parents went home and the ones without remained at the mission, myself included. Then we were sent to summer camp at Fort Pitt, Saskatchewan.

At camp we had a well stocked woodpile and did our own cooking. I can still taste those beans, sowbelly, bannock and smokey tea. Were they ever good! Once in a while a storm would come and blow our tent down on us. The hikes, swims, bonfires and songs are never to be forgotten. Then all too soon the day of departure came when teams and wagons awaited us and much to our regret we were on our way back to the mission and to the routine of books and slates for another year.

Dominion Day was always a great day for sports with a gathering of the Indians and others to take part in the horse races and many other events or to watch the parade. The Indians, being decked out in their feathers and beaded apparel, gave a wonderful display as they performed their native dances, such as the chicken, gift, tea and many others to the beat of drum and song. All were welcome to join in dancing until the early hours of the morning.

I was eighteen when I left the mission and went out to the H.P. RANCH to visit an only sister. This ranch was located on the shores of Tulliby Lake. It was a great neighbouring center where the farmers gathered each Sunday to spend the day. They also used the rural school for dances and other social events. It was all so new and interesting to me and I enjoyed my brief stay.

I then went to the Frog Lake farming district and the first people I met there were Mr. and Mrs. A. Granger. The two oldest boys, Freddy and Earl, were attending school, with Jean, being too young to attend, still at home. I enjoyed going to the evening services at the rural school as they were always so impressive.

Then I met Mr. and Mrs. H. Jenner and family. How well I remember the trips they made to Heinsburg with the cream each week. Also while at Frog Lake, I met Mrs. Sillem, the district nurse. I knew Mrs. H. Bowtell very well as she was once my school teacher at Onion Lake. She was also telegraph operator at Frog Lake for some time.

I returned to Tulliby Lake, married Robert Roberton and settled down on the farm. It was on this farm our family of seven were born and raised, five girls and two boys. Their names; Verna, Jeanette Mary, Roberta Grace, Kathryn, John Robert, Robina Caroline and David William.

The children were now of school age and the nearest school being a distance of four miles created some problems. The only means of transportation was by horseback in the summer and horse and toboggan in the winter. It was nothing out of the ordinary to see them drive down the hill, turn around rather than face the wind and cold, and, needless to say, there was the odd upset and runaway. As they grew older, their father gave the three oldest girls each a pony and they were given to understand that care was most essential to them. Owning a pony was the height of prosperity.

Robert operated a government ferry on the Saskatchewan River from 1928 - 1943. There were no living quarters at the ferry site, so the children and I stayed on the farm, which at times made things inconvenient. He then took another job with a construction company which took him to numerous places in Alberta. I joined him at Rocky Mountain House and from there the company moved us to Beaverlodge, four hundred miles north of Edmonton. We lived there for one whole year. I loved the frosty nights listening to the trees snap, the coyotes howling and the cattle bawling on some distant farm. There was much of the usual entertainment, but the one daily mail train delighted me the most. In 1952 we stopped in Calgary to visit the family and here we stayed.

Robert passed away in 1962 after a lengthy illness. Since then Calgary has remained my home but I still like the north.

Editor's note - The ranch, mentioned by Mrs. Roberton, was managed by a Mr. Ponsonby. It was reportedly one of the Prince of Wales' Ranches.