Until the late 1940's Heinsburg School was located on a portion of the present community hall site. The new site, on the river bank near the end of what is sometimes called "Riverside Drive", was the scene of a combination of structures erected and schools moved in. The very first classroom was built fairly close to the river, then Lake Whitney School was moved in and attached to it. When Norway Valley School was moved in it was left sitting by itself east of the other building. Construction onto the original building continued in the direction of the railroad track and later eastward.

In the late 1950s pupils from Frog Lake Reserve began to attend at Heinsburg, and later students were also bussed in from Fishing Lake. At one time portable classrooms were needed, and once a 'class was even housed on the stage. A most welcome addition was the gymnasium, which also required enlargement as enrollment increased. A senior library, a science lab., showers and washrooms, new general offices, an infirmary, a staff room, boiler and mechanical rooms were added. An elementary library was located in the west end of the basement, and recently industrial arts facilities were set up in the remaining space. The oldest part of the school contains a home economics room and a classroom. Students may also make use of amateur radio equipment in a portable joined to the east end of the school, and a dark room is available for photography classes. The school is used for various meetings, for Child Health Care and dental clinics, and for evening classes. Mrs. Olive Berg of Elk Point offered piano lessons in past years. 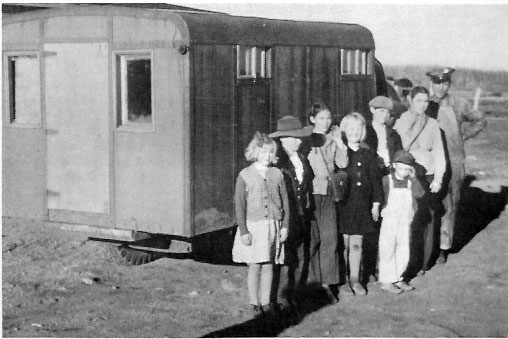 Colleen Hunt, Gerald Granger in front. Twelve more students to be picked up.

During the early years at the new location Grade XII was offered but later was dropped. However, in the spring of 1975 twelve young people participated in graduation ceremonies followed by a banquet and dance. 1976 saw thirteen more students graduate, and it was noted that an increasing number of native students are completing their secondary schooling. Former Heinsburg students can be found in all walks of life, making their way successfully in their chosen careers, .some having come into the public limelight. The smaller school still has much to offer in the 1970s.