In December of 1956, Sam and Amy Krider, along with George and Jean Kinch and other parents, were in at Kates' store picking out the candy to be included in bags of Christmas treats for the Heinsburg School. Doug and Sammy Krider, Tom and Larry Kinch, with Gerald and Dennis Granger, had travelled with the Krider team and sleigh to the Martin Clubhouse. There was to be a whist drive and the boys were to build a fire and sweep up. They were accompanied by a family dog.

All went well for awhile. Sammy was behind the stove putting on his boots. A can of gas had been brought to fill the lamps. When Doug opened the stove door there was a sudden explosion. Sammy, being nearest, was burned the worst, having all his clothes burned off him, from his belt to his boot tops. Doug sustained burned hands and legs.

The pressure created by the explosion jammed the logical escape route â the door. Doug broke a window and the dog jumped through both the inside and storm window. Once air rushed in the door would open. The others got Sammy out and did the first thing they thought of â rolled him in the snow.

As fast as the team could go they drove to Krider's. In spite of burned hands Doug, along with Betty and Sammy, drove to Jim Boyd's. There was no one home! On the way back they met and stopped a car. They explained the situation to the driver but he said that he didn't have time to take them to the doctor. Their next thought was to get to their Uncle, Archie Dewey. West of the Clubhouse site they met Frank Bendixen and Archie, who took them to Elk Point.

For three months Doug and Sammy were patients there, and every change of bandage was a terrible ordeal. Sammy was burned on sixty per-cent of his body. As soon as you stepped through the hospital door you could smell burned flesh. Sammy had to be placed on a screen so that his deep burns could drain. Although it was painful for Doug to straighten out his legs the doctors and staff insisted that he do so instead of drawing them up in a more comfortable position. That rule, no doubt, enabled his legs to heal in such a way that he can walk as well as he does today.

From Elk Point the boys were taken to the University Hospital in Edmonton where they spent another three months. ACT helped with the heavy expense of treatment and therapy in those days before Alberta Health Care. Many donations were received from compassionate organizations and individuals. 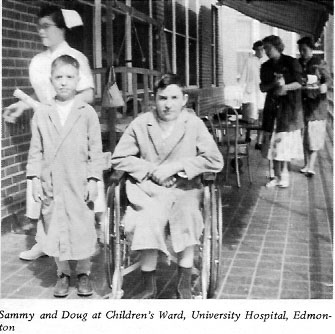 In the fall of 1957 Doug entered the Aberhart Memorial Hospital with TB, believed to have gained a foothold because of his rundown condition. After six weeks he was cured, but the rule was that you must remain six months.

Sammy recovered remarkably well. In the spring of 1958 he won seven track meet ribbons, including five firsts, a second, and a third. Doug started back to school, but finding himself behind his former classmates, he quit. It is ironic that Sammy was to survive such extensive burns only to lose his life in his early twenties. Today there is another Sammy Krider â Doug and Dorothy's third son.

With the kind permission of Sam and Amy we are including portions of Sammy's letter to them. 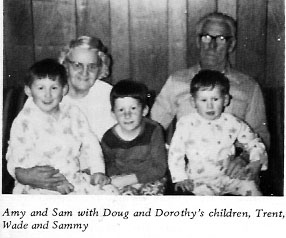 The following excerpts from Doug's letter of June 3, 1957 give us more information on their progress: "We are sure feeling good now. We don't walk by ourselves yet but soon will be. We are in wheelchairs now. We go to the Mewburn Hospital for shows. We can't walk by ourselves because our legs are bent a little yet. We get exercises every day now. We got twenty-five dollars from the Greenvale district. So we put it in the safe. We might get a bike."